Google harms consumers by favoring its own services, study finds

Two U.S. academics have published a report slamming Google's practice of blending links to its own services with general search results 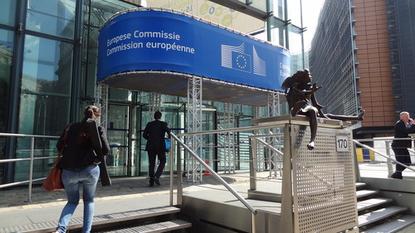 In front of the European Commission's Charlemagne building in Brussels on June 17, 2015

Google's favoring of its own services in search results doesn't just harm competitors, it also harms consumers, according to research sponsored by a complainant in the EU antitrust trial against the company.

The study found that users are 45 percent more likely to click on search results organically generated by Google's own search engine than on results in which Google favors its own services, as it does now.

"This suggests that by leveraging dominance in search to promote its internal content, Google is reducing social welfare -- leaving consumers with lower quality results and worse matches," the researchers found. The study "provides empirical evidence" that Google favoring its own products in some cases harms Google's users.

Their study was financially supported by Yelp, a site that allows users to review local businesses and one of the complainants fuelling the European Commission's antitrust investigation into Google's search practices. Yelp's data science team also contributed to the research.

Yelp presented the study during the Antitrust Enforcement Symposium held over the weekend at the University of Oxford in the U.K., a spokeswoman for the university said, and also sent it to the European Commission on Friday. The Commission declined to comment on the study.

The researchers based their findings on click-surveys of 2,690 users who took part in comparative tests of search result presentation. They showed two versions of search results for local business searches, which according to the study represent roughly one-third of desktop search volume and over one-half of mobile search.

For local search results, Google currently typically shows a list of seven business pins populated by results from Google's specialized search services such as Google+ Local and travel in relation to a map, the researchers said. Google calls such blending of results from its own specialized search engines into general search results "universal search."

In the researchers' alternative version, a browser plug-in was used to display a map and a list of search results based on Google's own organic algorithm, including links from third-party review sites such as Yelp and TripAdvisor.

The test was meant to determine which version delivered the most relevant information for the content in question. It revealed that 32 percent of users would click on Google's current local results while 47 percent clicked on the alternative search results. This nearly 50 percent increase in click-through rate is an immense difference in the modern Web industry, the researchers said.

"Google appears to be strategically deploying universal search in a way that degrades the product so as to slow and exclude challengers to its dominant search paradigm," the researchers said.

Google did not immediately respond to a request for comment. The company has always denied that it violates European antitrust rules.

The Commission opened its antitrust investigation into Google's search practices in 2010, triggered by complaints from competitors. Google was formally charged with abusing its dominant market position as a search provider in April. The Commission said Google violates European antitrust rules by systematically favoring its own comparison shopping product over competing services, a practice that hurts consumers and stifles competition.

A redacted version of the charges was sent to Google's foes earlier this month; they were given four weeks to respond. Meanwhile, Google has still to respond to the Commission's charges.

Meanwhile, the Commission has also started an investigation into Google's bundling of its apps with the Android OS.