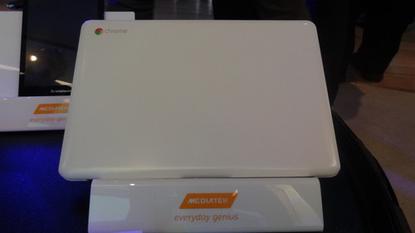 Chip maker Mediatek is preparing to enter the laptop business, with the first Chromebooks based on its processors due to appear soon.

So said Mediatek senior vice president Jeffrey Ju at the Computex trade show in Taipei. The company also showed a non-working Chromebook with its 64-bit MT8173 quad-core processor and a USB Type-C port.

Ju didn't say exactly when PC makers will release Chromebooks with MediaTek's chips, but another MediaTek representative said the laptops could appear in the second half of this year or early next year.

Chromebooks, which run Google's Chrome OS, are catching on as a low-cost alternative to Windows PCs for users who do most of their computing on the Internet. The usage model is much like tablets and smartphones, with most applications requiring an Internet connection, though Google is making more offline applications available.

But if a Chromebook were to appear with the top-line MT8173 chip, it would be a computing powerhouse. The chip -- which has four Cortex-A72 CPU cores -- is able to deliver PC-like performance, and can process 4K video. But Chromebooks would run just fine with slower processors as most of the computing takes place in the cloud.

MediaTek already has a strong presence in the low-cost smartphone and tablet space with its ARM processors. Mobile devices will remain MediaTek's main focus, but the company wants to go higher up the computing foodchain by putting its processors in Chromebooks.

Chromebooks are a beacon of hope in an otherwise stagnant PC market. Chromebook shipments worldwide will touch 7.29 million [M] this year, growing by 27 percent compared to the previous year, according to Gartner. However, growth will slow down in 2016, with shipments expected to tally 7.95 million units, Gartner said.

Thin designs and low prices have made Chromebook attractive to buyers. The most inexpensive Chromebooks are 11.6-inch models from HiSense and Haier, which are priced at $149 and have ARM-based processors from Rockchip. Chromebooks with MediaTek's chips could fall into the same price range. MediaTek will also compete against Intel, whose x86 processors dominate Chromebooks.