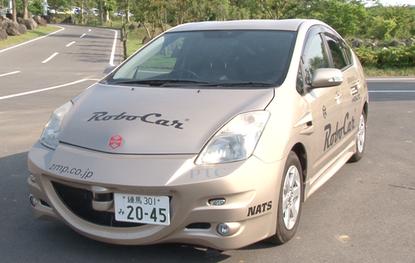 This image from a video supplied by Tokyo robotics company ZMP shows a prototype self-driving car at a test track in Japan.

Mobile games giant DeNA hopes to begin a robot taxi service in Tokyo by 2020, joining Uber Technologies and Google in the race to offer self-driving cabs and cars.

"Our dream is to have some unmanned taxis for the 2020 Olympics in Tokyo, which would impress people everywhere," Hiroshi Nakajima, a senior vice president at DeNA, said at a news conference Thursday in Tokyo.

The company didn't give details about its plans or set any firm milestones for deployment. But one advantage it has is a partnership with Tokyo robotics company ZMP, which has been developing robot car platforms, sensors and camera technologies for years.

DeNA and ZMP have set up a joint venture, Robot Taxi, that they say is the world's first to be exclusively dedicated to unmanned cab services. Some of its users would include elderly, handicapped and people living in rural areas, ZMP CEO Hisashi Taniguchi said.

While the companies did not provide details about what features the robot taxis would have, Taniguchi said they would likely be in the minivan class, larger and more luxurious than the modified Toyota Prius that ZMP has been testing in the Nagoya area in collaboration with Nagoya University.

That test platform, called RoboCar, was seen in a ZMP video distributed to reporters Thursday. It showed a Prius equipped with sensors on its roof, sides and rear slowly navigating a test track while a man in the driver's seat kept his hands off the wheel.

The Prius is one of the platforms that Google has modified for its self-driving car project, which is entering a new stage. The search engine is poised to bring the first autonomous cars it has built itself onto the roads of Mountain View, California, this summer.

"Safety drivers" are slated to go along for the ride in the Google cars but will only take control if needed.

Ride-hailing app maker Uber is working with Carnegie Mellon University on a research center for self-driving vehicles, it said in February.

While Google is several laps ahead in the robot car race, Nakajima said DeNA's user experience for robot taxis wouldn't be inferior to those of the search engine. DeNA will leverage is know-how in mobile apps to develop various services linked to Robot Taxi, from in-vehicle entertainment to insurance and travel businesses, he added.