EU plunges ahead with Amazon probe despite change to tax practices 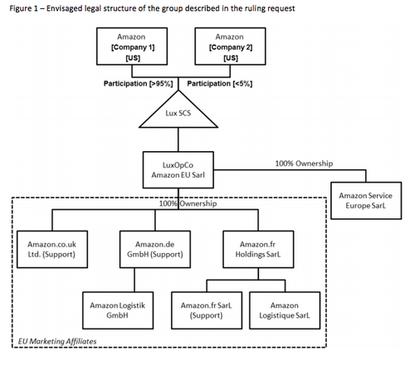 Amazon has changed its tax-payment practices in Europe, but that is not going to halt the European Commission's investigation into what it considers to be a likely illegal tax deal with Luxembourg.

Amazon's EU tax practices have been under investigation since October last year when the Commission said it was very likely that the company received illegal state aid in the form of a preferential tax deal with Luxembourg. The deal allowed Amazon to funnel a large part of its European profits to one of its companies in Luxembourg. The company did not have to pay income tax, and thereby avoided paying taxes in the EU, the Commission said in preliminary findings.

Amazon though is changing its tax practices and as of May 1 started booking retail revenue in Germany, Spain, the U.K. and Italy that was previously recorded in Luxembourg. It is working to do the same in France, it said Wednesday. The company regularly reviews its business structure and began the process of establishing local country retail branches more than two years ago, it added.

The changes its structure won't stop the Commission's probe though.

"The Commission's state aid investigation is ongoing and will continue. We are examining the concerns that the tax ruling granted by Luxembourg to Amazon is providing the company with selective advantages," Commission spokesman Ricardo Cardoso said, adding that the Commission will consider the announced changes to the Amazon group's tax structure.

Amazon's changes will not affect the issues of possible advantages Amazon had in the past, Cardoso said.

The probe into Amazon's tax deal is part of a wider crackdown on corporate tax evasion in the EU.Apple is subject to a similar investigation over a deal struck with Ireland. The company recently warned that the impact of the investigation could be "material", but it did not provide an estimate of the possible back tax payments it is anticipating.

The Commission has also started investigations into tax deals struck by Fiat in Luxembourg and Starbucks in the Netherlands. It also started a probe into Belgian tax rulings.