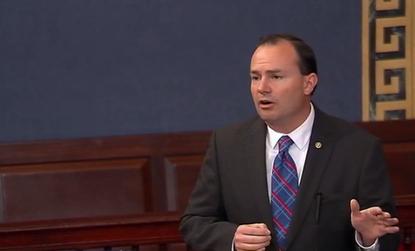 Senator Mike Lee, a Utah Republican, joins a filibuster on the Senate floor against extending the telephone records collection provision of the Patriot Act on May 20, 2015.

Four U.S. senators ground the chamber's business to a halt Wednesday in an effort to prevent lawmakers from voting on a bill to extend portions of the Patriot Act used to collect telephone and business records from the country's residents.

Time is running out for the Senate to extend the telephone records collection section of the Patriot Act before it expires at the end of the month. In an effort to block a vote, Senator Rand Paul, a Kentucky Republican, took control of the Senate floor in a filibuster mid-Wednesday, with Senators Ron Wyden, an Oregon Democrat, Mike Lee, a Utah Republican, and Martin Heinrich, a New Mexico Democrat, joining him later in the day.

The three senators have criticized the National Security Agency program used to collect U.S. telephone records in bulk for nearly a decade, with the agency citing authorization from the Patriot Act. Section 215 of the law allows the NSA to collect any domestic telephone and business records that U.S. officials find relevant to an ongoing antiterrorism investigation, and the past two presidential administrations have used that language to collect nearly all U.S. telephone records.

Senate leaders had planned to bring a bill to extend the Patriot Act's business and phone records provisions beyond June 1 to the floor on Wednesday, but the Paul's filibuster prevented that from happening.

Paul called for a robust Senate debate on whether to extend Section 215 before a vote. During the week, the Senate has been debating a fast-track trade bill, but Paul objected to a quick vote on extending the Patriot Act. "Shouldn't we get together and say, 'Let's have a debate; let's devote a week to this?'" Paul said.

"I see no reason you can't have security and the Constitution at the same time," he said. "There's no reason why we can't catch terrorists like we catch other bad people in our society, by using the Constitution."

The NSA is collecting the records of "hundreds of millions of Americans, and I think it ought to stop," Paul added.

The Senate has just two days to extend the telephone records section of the Patriot Act before that portion of the antiterrorism law expires. U.S. lawmakers are scheduled to leave Washington, D.C., on Friday for a week-long break for Memorial Day, and without action, the telephone records program would come to a halt at "11:59:59" p.m. on Sunday, May 31, according to a U.S. Department of Justice spokesman.

The Senate is scheduled to vote Friday afternoon on a fast-track trade bill. Paul potentially could control the Senate floor until then. Paul took the Senate floor at 1:18 p.m. EST Wednesday and spoke for about two hours and 25 minutes before Wyden joined him on the floor. The filibuster continued late Wednesday.

Earlier this month, the House of Representatives passed the USA Freedom Act, a bill aimed at ending the NSA's bulk collection of U.S. phone records, while allowing the agency to continue collecting U.S. data in a more targeted manner. But Senate Majority Leader Mitch McConnell, like Paul a Kentucky Republican, has pushed for a straight renewal of Section 215 of the Patriot Act with no new limits on NSA records collection.

McConnell on Tuesday said the Senate has an obligation to vote on the Patriot Act before the Memorial Day break, by either voting on the USA Freedom Act or an alternative.

"It's my view that letting it expire is not a responsible thing to do," McConnell said on Tuesday. "What I think is the most important thing is to make sure we still have a program, a program that works, and helps protect the American people from attacks. That's the bottom line here."

Meanwhile, a coalition of digital rights groups called for nationwide sunset vigils at 7 p.m. Thursday to oppose an extension of Section 215 of the Patriot Act. Participating groups include Demand Progress, Fight for the Future and Free Press. The vigil in Washington will be on the west lawn of the Capitol Building.