Facebook tackles 'myths' about Internet.org, says it's no walled garden

The service for underserved markets is only successful if it lets users reach the broader web, the company said Wednesday 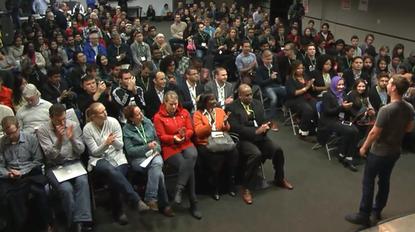 Facebook's Internet.org project provides access to online services in developing countries, but it's also sparked questions about its compatibility with net neutrality, Facebook's underlying business motives and how the company collects user data. On Wednesday, Facebook sought to set the record straight.

Internet.org allows people to download an app and browse certain health, employment and local news websites without paying data charges. But because it provides access to only a few services picked by Facebook, some critics say it breaks the principles of net neutrality, where all services should be available equally.

But it's a myth that Facebook wants to keep people in a "walled garden," the company said in a blog post Wednesday titled, "Internet.org: Myths and Facts."

"Facebook supports net neutrality and has worked throughout the world to ensure that services can't be blocked or throttled and to ensure that fast lanes are prohibited," the company said.

The issue has caused problems for Internet.org in India, where some partners pulled out or threatened to leave over it. But Facebook says Internet.org is good for consumers and good for choice.

"Net neutrality and Internet.org can and must co-exist," it says.

Facebook also rejects the notion that Internet.org exists for it to make money in developing countries. No company pays Facebook to be included in Internet.org, it says, and Facebook does not show ads through the service. If revenue were the goal, Facebook would focus on markets where online advertising was thriving, the company says. Internet.org partners, however, can run ads within their services.

Facebook also said more about how it collects data through the project. It says it collects navigation information so it can determine what traffic can be delivered with no data charges, and to see which services are popular and which to launch in other countries. But it says it doesn't store user-level navigation history beyond 90 days, and it doesn't share user-level navigation information with partners.

The project provides access to a total of over 100 services in 11 countries including India, Ghana, Colombia and Kenya. On Wednesday, it also launched in Malawi.

Earlier this month, Facebook opened the Internet.org platform to outside developers so that it could support a wider range of services.