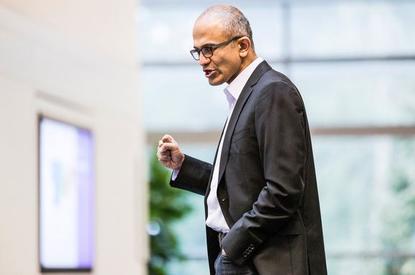 Microsoft reimagined
Seizing the momentum, Nadella soon announced a more refined guiding light for Microsoft. Whereas Steve Ballmer dreamed of becoming an Apple-like devices and services company—even going so far as to spend $7 billion on Nokia to advance the goal—Nadella sees Microsoft as a platform and productivity company with a mobile-first, cloud-first focus. “We help people get stuff done,” he said in a manifesto.

The results of that refinement have been clear throughout Nadella’s first year: in Office for iPad, in the introduction of universal Windows apps, in the cross-device design of Windows 10, and the release of a slew of Microsoft apps for iOS and Android. Nadella’s Microsoft is walking the talk.

Microsoft has announced that Kurt DelBene has been named executive vice president of Corporate Strategy and Planning, reporting to CEO Satya Nadella in Redmond.

DelBene is returning to Microsoft, where he was most recently president of the Microsoft Office Division.

After leaving Microsoft in 2013, DelBene then served as senior advisor to the Secretary of Health and Human Services where he was appointed by President Obama to oversee implementation and improvement of Healthcare.gov.

DelBene most recently has been a venture partner at Madrona Venture Group, concentrating on investing and advising in early stage, technology-focused startups in the Pacific Northwest.

“His experience at Microsoft, recent work on healthcare.gov, and work with startups here in Seattle give him a unique perspective for this new role.”

DelBene will serve on the Senior Leadership Team, and will lead both cross-engineering and cross-business strategy and execution initiatives with an emphasis on opportunities that span product and engineering boundaries.

In this role, he will focus on identifying future investments and opportunities; working with other senior executives to ensure end-to-end execution; and assisting the CEO in communicating, executing and sustaining strategic initiatives.

“I’m excited to rejoin Microsoft,” DelBene said. “My time in Washington and in working with startups has brought a fresh appreciation for the challenges our industry faces, and the ways Microsoft has the talent and ambition to tackle these challenges in creative ways.”