Five years in the making 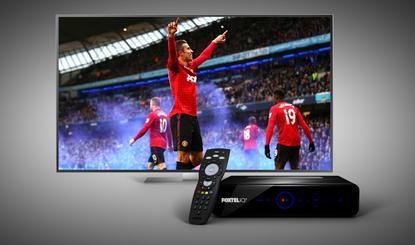 Foxtel has overhauled its cable-TV platform to incorporate Internet-savvy services, a unified interface across different devices and has launched a new set top box distinguished by an upgradable set of features.

Overhauling the architecture of Foxtel’s platform to a model that best harnesses the potential of the Internet has taken five years, but the move will future proof its offering “for the next 20 years”, said Mike Ivanchenko, the director of product at Foxtel.

Having an active Internet connection means customers can upgrade to new features as they become available, hold onto their set top boxes for longer and benefit from video-on-demand functionality.

Foxtel’s iQ3 set top box is launching today to coincide with the launch of its upgraded platform. The standard iQ3 set top box has a 1-terabyte hard drive that company representatives claim can record 172 hours of content in high definition resolution.

A brand new interface, which is being pushed out to all of the devices in Foxtel’s ecosystem, blurs the line of delivery and makes it about content, said Nick Dandy, the head of managed products at Foxtel.

“It is a true hybrid box. It combines broadcast and IP and it also combines live TV and video-on-demand seamlessly.

“The intent here is to bring all of it together in one overall experience so that customers just find the content they want to watch and then watch it,” Dandy told Good Gear Guide.

“It’s actually not just a brand new box. It’s a brand new head in, it’s a brand new platform. The whole architecture is designed to make it very easy to upgrade things in the future and to keep it as flexible as possible for use moving forward.”

A roadmap of future upgrades is already scheduled for the iQ3 set top box. It can record three shows simultaneously while a fourth is being watched; however, inside it are eight television tuners, and representatives claim these will be used to deliver new features over time.

The redesigned bluetooth remote control has large navigational- and menu-buttons, which will double as a trackpad when future upgrades are pushed out.

Other upgrades further down the roadmap include the potential for an internet-only service delivered over the national broadband network. Support for Ultra high definition content is another possibility.

Foxtel’s iQ3 gains several notable features. Shows half-way through a television broadcast can be seamlessly restarted over a video-on-demand stream. The television guide can display programs aired in the previous 24 hours and those that are in the upcoming 24 hours. Applications contextual to television shows can be downloaded, and a ‘Trending’ subheading summarises which television shows across Australia are the most popular in five minute intervals.

The set top box has been redesigned. The only physical button is a power button. Capacative keys glow blue anytime a hand nears and then dim when not in use. The iQ3 works over Wi-Fi and or can be plugged directly into a modem-router using an Ethernet cable. Other connection types include Wi-Fi direct, HDMI, USB and an optical output.