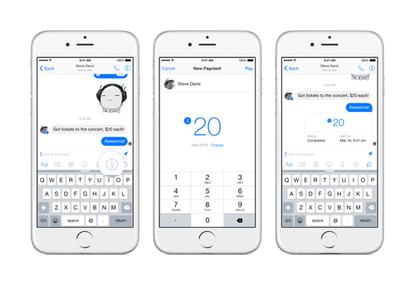 Users of Facebook's Messenger app will soon be able to do more than just chat with friends and send them emoticons. They'll also be able to send money.

Facebook is adding a payments feature to its popular Messenger app, letting users link their debit card and send each other payments within the app. The tool is designed to be as easy as sending messages, with a "$" icon that will appear in the app. By tapping it, users can send money to the friend they're chatting with. Recipients of the money will have to link their debit card to accept the funds.

The free feature will be rolling out over the coming months in the U.S. to Messenger on Android, iOS and the desktop. Facebook made no mention of Windows.

The feature is designed to allow money transfers to happen right away, though it might take one to three business days for the cash to be made available to recipients, depending on the banks involved, Facebook said in announcing the feature on Tuesday.

With the feature, Facebook becomes a competitor amidst a growing number of players in what's known as peer-to-peer payments. PayPal has provided a way for people to send each other digital payments, and China's WeChat messenger app also has the function. There are also several mobile money services available in Africa. But activity in this area has been heating up in the U.S., as both payment processing companies and messaging app developers add the functionality to their apps.

To be clear, Facebook's new feature is focused on peer-to-peer payments, not mobile payments you might make in a store with a smartphone equipped with Apple Pay or Google Wallet. But Facebook might at some point employ some of the feature's technology into making in-store or e-commerce payments.

Facebook is already experimenting with e-commerce, through the use of a "buy" button for purchasing items directly on its site. Having millions of people's debit card information on file would be a nice thing, should Facebook expand that program or expand its use among advertisers.

With more than 500 million users, the reach of Facebook Messenger is huge. It could give the company a leg up in expanding the use of its new payments feature. Facebook has already processed millions of transactions, for its advertisers and for payments for games played on the site. The company did not, however, mention plans for global rollout of the service.

The company said it would encrypt people's card information when it's stored. For added security, users can choose to require a PIN to be entered to send money.

The payments feature does not currently allow payments through credit cards, prepaid debit cards and PayPal.