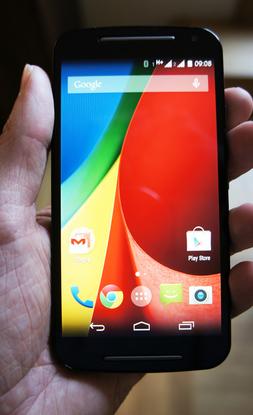 Motorola Mobility will start shipping the second generation Moto G with LTE in Europe later this month, while smartphone buyers in the U.S. will have to wait.

The price will be €199 (US$210) in countries such as Germany and France and £159.00 in the U.K. with tax. It will start shipping the week of March 16, according to Motorola. The company didn't provide any details on a possible U.S. launch, only saying that it wasn't included in the launch.

The exclusion of LTE when Motorola announced the second generation Moto G back in September was surprising, since there already was a 4G version of the original model. But the company is now starting to rectify that by expanding availability outside Brazil, where the 4G phone went on sale earlier this year.

The LTE version is a bit heavier than the 3G version and has a larger battery: 2390mAh versus 2070mAh. Both models are powered by a quad-core Snapdragon 400 processor and have a 5-inch, 720 x 1280 pixel screen.

The processor gives away the fact that, even though it is just going on sale, it is still a smartphone from last year. In comparison, the upgraded version of Motorola's own Moto E, which costs $150, is powered by the newer Snapdragon 415.

Competition in this segment of the market is heating up. For example, ZTE's $250 Blade S6 has Qualcomm's octa-core Snapdragon 615 inside. Just like the Moto G it has a 5-inch HD screen, but also adds a 13-megapixel main camera and a 5-megapixel front camera.

The Moto G's specification is still respectable, but what makes the latest versions of the Moto G and Moto E good alternatives is the sturdy design and Motorola's lean approach to the Android Lollipop user interface. Less powerful smartphones can become a little sluggish when vendors make too many additions on top of the standard interface.

This week, Motorola also expanded the Moto Maker customization offering to include the Moto 360 smartwatch.