MWC 2015: Hands-on - LG hopes for a spot on your wrist with the Urbane and Urbane LTE 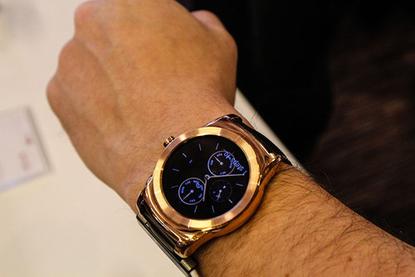 The Watch Urbane looks great on any wrist—especially in rose gold. LG calls it “gold,” but I think it looks more rose gold-y

LG is taking a different approach to its wearables strategy. It's hoping to appeal to those who value style and design over utilitarian functionality.

The G Watch R  was the first incarnation of this design philosophy, and now LG's following it up with two more: the Watch Urbane and the Watch Urbane LTE. I got to try on both during a closed press event at Mobile World Congress.

This is a smartwatch I can't wait to wear. The LG Watch Urbane is one of the most stylish smartwatches I've worn thus far, and it actually reminds me of some of the women's watches sold by fashion brands like Michael Kors. I particularly love the Urbane's rose gold chassis, not to mention the comfortable leather band LG outfitted it with. There's also a brushed stainless steel version of the Urbane, if gold is not really your thing.

Like the G Watch R, the Urbane sports a 1.3-inch POLED display and contains a Qualcomm Snapdragon 400 processor and 1GB of RAM. It's also got a 410mAh battery, which LG said should last more than a day on just one charge. I'm curious to test this claim once we get the device in for review, especially since Android Wear devices haven't had the most reliable battery life.

The Urbane is essentially a more stylish, narrower version of the G Watch R. It has many of the same features as its predecessor, like a heart-rate monitor, always-on watchface, barometer, and water- and dust-proofing. I imagine the style conscious will be much more attracted to this Android Wear device than any of the others out on the market right now--I definitely was.

The Urbane LTE is not as stylish, or as thin, as the regular Urbane. It's heavier, thicker, and the watchband utilizes a metal clasp rather than a buckle.

It's powered by all the same hardware as the regular Urbane, except for larger a 700mAh battery pack. As the name states, it also has standalone LTE. LG said it's still sussing out the details of the data plans for this device, but that we'll learn more about it in the next two months.

The Urbane LTE also has NFC built into the watchband for mobile payments, though you won't be able to swap the watchbands because of this feature.

To get the mobile payments feature running, LG swapped out Android Wear for its own custom version of webOS. The software utilizes a similar cards-like interface as LG's SmartTV UI, and it's packed with specialized fitness-centric apps developed by LG that can do things like measure your golf swing or map your hike with built-in GPS. Also, instead of Google Now, the Urbane LTE uses LG's own Q Voice.

The Urbane LTE has three hardware buttons: one to bring up the interface, and two on either side that you can customize to your liking. There is a bit of a learning curve; the interface isn't like Android Wear. LG said that if Google's Android Wear does incorporate NFC payments in the future, it may then opt for the OS, but for now it's sticking to webOS to offer these features. Though it doesn't run Android Wear, the Urbane LTE will nonetheless only work with Android devices.

LG said it will release both of these watches in Korea before launching them globally. It also explained it wanted to announce them now so as not to "lose momentum in wearable devices," especially since it's rumored the Apple Watch may be launching soon.