IBM has made its case as an enterprise Cloud vendor with something special: Watson, its one-of-a-kind, cognitively-capable platform 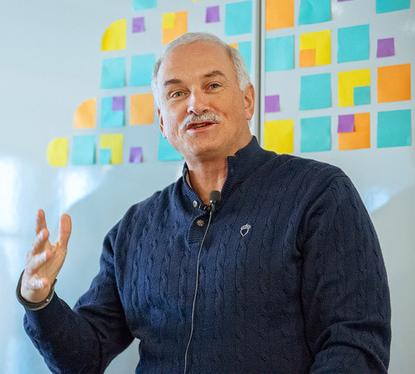 LAS VEGAS: IBM has made its case as the enterprise Cloud vendor, and it did so without overtly criticising other vendors. On a large stage in a big arena, IBM officials seemed low key, almost humble, in a presentation that nonetheless ended with a jab to the heart.

The last part of a two-hour presentation at InterConnect 2015, entirely devoted to the Cloud, included a lengthy segment on how Watson, its machine learning, cognitively-capable platform is being used to tackle cancer. It used real-life examples of cancer victims in the same age range of its audience. You could detect a ripple of angst in the crowd after a large image of a well-dressed man with a lung cancer diagnosis appeared on the screen. This was IBM at its best.

IBM faces fierce competition in the Cloud - and most other things. But it is also a company capable of working directly on the world's most consequential problems. The cancer research presentation was a way of underlining the importance of its plans to extend and broaden Watson capabilities to its Cloud development platform.

There were about 21,000 people at IBM's big conference, and many of the them know they have plenty of options when it comes to the Cloud.

"Does the approach make sense?" said Alex DeJong, an architect at a health services firm, following IBM's presentation on its hybrid Cloud model. "I think it does - the question is do we need IBM for it?"

DeJong noted that while there are lot of open source Cloud options for users, having Watson availability "is very powerful. That is something highly complex and not easy to come out of the open-source community."

Peter Krawetzky, a senior infrastructure specialist at a financial services firm, agreed that users have "plenty of options." The question is "who makes the best option and one that is financially responsible?"

IBM announced improvements to its hybrid cloud capabilities designed to make it easier for users to manage and seamlessly integrate their in-house environments with external Clouds. It underscored "open," and said its hybrid platform can work with any OpenStack compliant infrastructure.

"You don't want to be locked in," said Robert LeBlanc, IBM senior vice president for cloud.

Included in the announcement was information about the ongoing growth of IBM's datacentre capability and partnerships with larger IT services providers who are training staff on its Bluemix Cloud development platform, Tech Mahindra and Computer Sciences Corp (CSC).

Charles King, an analyst at Pund-IT, said that one message IBM is delivering at the conference is that it is a strong supporter of open source. IBM was the first Tier One vendor to support Linux, for instance.

The second message is that Watson is unique.

"No other vendor has developed, let alone delivered, a solution comparable to IBM's," said King, of Watson. "Making Watson-based Cloud services available is something that literally no one besides IBM can do."

The third message is about IBM's spending on its Cloud services. Although the company has faced some financial challenges, it is pursuing "a more sensible and financially sustainable path in building out Cloud datacentres" than some of its competitors, said King.

"What IBM wants people to come away with here is a certainty that whatever may happen in the future, IBM will still be reliably supporting and delivering cloud-based solutions that its customers need to do business," said King.