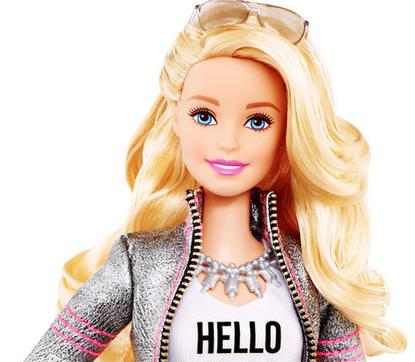 Toys always reflect the larger culture -- its biases, fears and, most of all, its technology. New York's Toy Fair 2015 happened this week, and the latest round of new tech toys is bringing some of the most disturbing tech trends to children.

Let's take a look at this years most disturbing crop of tech toys for kids.

Mattel announced this week that it's working on a new doll called Hello Barbie. The new, $75 toy will be able to hold conversations with its owner and even learn things by using voice recognition.

Hello Barbie is a little like Apple's Siri, Google Now or Microsoft Cortana. When the child talks to Barbie, the voice is recorded, uploaded to a server somewhere, processed, then an appropriate reply is sent back through the doll, which has to be connected to a home Wi-Fi network in order to function.

The speaker and microphone are housed in Barbie's necklace. Each of her legs has a rechargeable battery. Barbie will go for an hour between charges.

But here's the disturbing part. Recordings made by the child are uploaded and stored on a server run by a company called ToyTalk, which is Mattel's Hello Barbie partner -- at least if Hello Barbie functions like ToyTalk's other products.

The ToyTalk system will also email the recordings of their child's conversations to parents. Parents can also set limits on allowable topics of conversation.

In other words, Hello Barbie prepares children for a world of pervasive surveillance, where their most intimate communication will be uploaded to a central server somewhere, processed by remote servers, then used by an all-knowing authority to monitor and control them.

Mattel and Google partnered on a new version of the View-Master.

We all remember the original View-Master, those plastic 3D binoculars that show pictures from a cardboard wheel.

The new version is based on Google's Cardboard virtual reality platform.

Like Google Cardboard, or for that matter Samsung's Gear VR headset, Mattel's new View-Master relies on a smartphone to provide the screen, camera, microphone, motion sensors and more.

This class of VR headset, which relies on a phone, is much cheaper than most. In Mattel's case, the new View-Master will cost just $29.99. Mattel will make a free app to go with it, although the View-Master will also work with any Cardboard app.

The main benefit of the actual View-Master product, or any other Google Cardboard device, is that it uses lenses to focus each eye on a separate panel on the screen, which creates the illusion of 3D.

Oculus Rift and other higher-end systems, on the other hand, will show high-definition, real-time video in 3D and in all directions.

Still, the View-Master is a gateway drug to real VR and AR.

The new View-Master will demonstrate to kids that virtual reality is better than actual reality, and that living inside an immersive fantasy world is an experience that's always one second away.

It will provide a generation of children who already spend way too much time with screens -- TVs, tablets and smartphones -- with even more time with screens, which will be literally a few inches from their faces.

It's inevitable that -- like the original View-Master -- the new device will be marketed to children. (Remember how Disneyland-heavy those original collections of View-Master discs were? Yeah, those were ads.)

Mattel's new View-Master will prepare children for a world where a virtual world -- a Matrix, if you will -- brought to you by McDonald's, Pepsi and Lucky Charms, is way better than real life and is always a moment away.

A new smart toy is really smart. It comes from a startup called Elemental Path, and the line of toys is called CogniToys.

The first CogniToy is a green dinosaur with a big blue button on its belly. Kids can press the button, then ask a question. And they get an answer.

Here's the mind-blowing part: The question is processed, and the answer is given, by IBM's Jeopardy-winning Watson artificial intelligence supercomputer system.

When parents set up a CogniToy for their kids, they're asked to tell about their child. That information is incorporated into the customization engine. From there, the dinosaur plays educational games with the kids designed to boost their vocabularies, spelling, math skills and geography knowledge.

In the CogniToy vision of the world, an all-knowing supercomputer becomes babysitter, teacher, parent and friend.

CogniToys prepares kids for a post technological-singularity world where knowledge is obsolete -- something that exists in the cloud, rather than in one's own mind and based on one's own experiences.

Please note that I'm not criticizing Mattel or Elemental Path for their innovative toys. I'm not judging the parents who choose these toys for their children. And I'm certainly not blaming kids for wanting, using or enjoying these toys.

If this freaks you out, it's worth noting that our own world would have freaked out our ancestors, if they could somehow have known about our online surfing habits, our obsession with social media, the centrality of smartphones in our lives and the depth and pervasiveness of surveillance and privacy violations.

Likewise, we're likely to be uneasy about a world where toys spy on children, provide them with alternative realities and babysit them with all-knowing A.I. supercomputers.