Smartphone shipments fell in Japan while those of feature phones are up, another sign that older devices won't go away 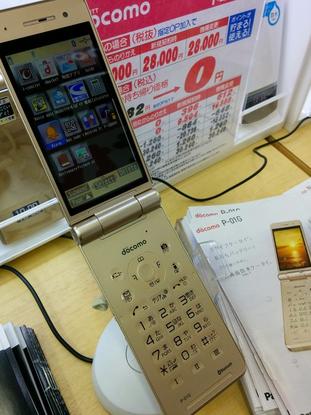 Telegrams remain popular, the fax machine industry is alive and well and now shipments of feature phones are on the rise.

For the first time in seven years, shipments of old-school flip phones increased in 2014 while those of smartphones fell. While it may be a statistical anomaly, Japan's flip phones are highly evolved devices with unique features that keep them popular.

Feature phones notched a 5.7 percent gain last year to 10.5 million units, compared to a 5.3 percent drop in smartphone shipments to 27.7 million, according to MM Research Institute (MMRI), which noted that Apple retains a dominant smartphone share of about 60 percent. The MMRI study followed feature phones, which in Japan consist mainly of flip phones,

Lower hardware and data costs are one of the main reasons for feature phone longevity in Japan, a researcher with MMRI said, adding that they're still a hit with older people. But while Japan has one of the world's most rapidly aging populations, feature phones are still around for a variety of reasons.

"Although smartphones are getting popular, some users prefer a simple key touch operation, durability of batteries and the simple user interface of flip phones," said spokeswoman Miyuki Nakayama of phone maker Sharp, which is introducing a new flip phone that operates on 4G LTE networks.

Sharp, Fujitsu, Panasonic and NEC can't compete in the global smartphone market, and even Sony has lost to Apple on its home turf, but they continue to produce a range of flip phones for the Japanese market.

"Reliability is a good selling point for the feature phones, whose longer battery life when compared to smartphones is reassuring to users who tend to use voice services most often and need to be readily accessible, such as salespeople," Joseph Jasper, a spokesman for feature phone maker NEC, said in an email.

Feature phones are also used by white-collar workers who don't surf the Web intensively, as well as budget-minded users who want to take advantage of cheaper contracts and data rates, a salesman at major electronics retailer Bic Camera said.

He pointed to the N-01G flip phone from mobile carrier NTT DoCoMo, manufactured by NEC Casio Mobile Communications and released last fall. It has an 8.1-megapixel camera, 3.4-inch TFT screen, standby battery time of 780 hours, download speeds of 7.2Mbps, TV channel viewing through the One-Seg terrestrial digital broadcast service and a mobile device pairing function to receive email alerts. Of course, it can also be used to browse websites.

Add to that a secondary screen on the phone's shell that can display the time and alerts without having to unlock the main screen, and it could be a worthy alternative to smartphones.

"Being a flip phone user myself, I feel it is easier and more reliable to speak on the phone because the microphone is closer to my mouth," NTT DoCoMo spokesman Takuya Ori said via email. "Also, I'm used to typing on my 10 digit keypad, because I used to type in messages from a pay phone when pagers with text messaging functions were around in the 1990s."

Feature phones in Japan are sometimes called "garakei," a portmanteau derived from "Galapagos" and "keitai," or mobile phone. "Galapagos syndrome" is a Japanese term denoting the highly evolved and uniquely Japanese attributes of consumer products and has been used to explain why Japan's phones couldn't make it in the global marketplace.

An exmaple is DoCoMo's i-mode mobile internet service. Supporting paid services spanning everything from social networking to music downloads, i-mode was rolled out as far back as 1999 and amassed an enormous user base in the country, but the technology has been largely eclipsed by smartphone apps.

DoCoMo, which finally agreed to carry iPhones in 2013 after years of resistance, developed an i-mode-style portal site for smartphones called d-menu, but it has kept i-mode and won't abandon traditional handsets either.

"There is still strong demand for flip phones in Japan," Ori said. "We will be deploying new flip phones continuously, as long as there is demand for such devices."