The Upload: Your tech news briefing for Monday, February 16 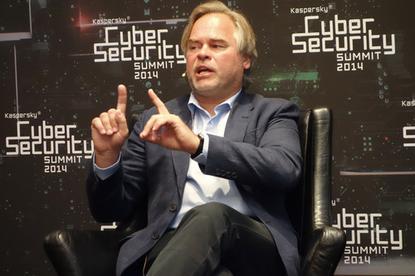 Eugene Kaspersky, chairman and CEO of Kaspersky Lab, spoke on Tuesday at a Kaspersky conference in San Francisco.

Russian cybersecurity firm Kaspersky Lab is releasing a report Monday with some details on a wide-ranging series of hacks into at least 100 banks in 30 counties -- some of which are apparently still ongoing. Kaspersky gave the New York Times an advance look at the material, and says that losses total at least $300 million, mostly suffered by banks in Russia but also affecting institutions in Japan, Europe and the U.S.

Apple may have just had its best quarter ever in China, but market researcher IDC says the king of that market is still Xiaomi, the local upstart maker of low-cost smartphones. Canalys recently assigned Apple the top spot, but by IDC's count it had just 12.3 percent to Xiaomi's 13.7 percent. Struggling Samsung Electronics meanwhile is all the way back in fifth place, behind Huawei Technologies and Lenovo.

Proposed U.S. rules governing the use of drones are good news for photographers but bad news for Amazon.com's schemers. The Federal Aviation Administration and Department of Transportation are aiming to knock down the obstacles to some commercial use of drones with draft regulations made public on Sunday, but for now, they won't allow the sky to be filled with tiny flyers delivering packages for e-commerce companies.

The truth will come out in the wash, but right now LG has engaged the spin cycle. Following the indictment in Seoul of a high-ranking executive and two employees for allegedly damaging rival Samsung's washing machines in Berlin ahead of the IFA trade show, LG has released closed-circuit video footage that purportedly shows Jo Seong-jin, the head of its home appliance division, simply "testing" his rival's wares. LG said that German prosecutors have dropped the case of the broken door hinges.

Apple rumored to be exploring a self-driving car

Anything Google can do, Apple thinks it can do better? Reuters cited an auto industry source as saying that Apple is picking the brains of experts, "gathering advice on parts and production methods, focusing on electric and connected-car technologies, while studying the potential for automated driving." That adds the self-driving wrinkle to an earlier report about Apple's automotive aspirations: On Friday, the Wall Street Journal reported that Apple is working on developing an electric car, in a project code-named Titan.

What happens when the fruits of human art and intellect are stored on obsolete digital media? Tech pioneer Vint Cerf has painted a gloomy picture of what he called "bit rot": a world in which "rapid evolution of technology quickly makes storage formats obsolete" -- and the information stored in those formats is lost. Fortunately, he has a solution to propose.

The Net is back in the Congo, though political turmoil remains

The government of the Democratic Republic of the Congo has restored Internet service, after cutting access across the country last month to thwart protesters. The move was prompted by widespread opposition to President Kabila's attempts to change the constitution so he could stay in office. ISPs and mobile telecom operators said the shutdown cost them millions of dollars in lost business.

Re/code's Kara Swisher sat down with Obama on his trip west last week and asked him about how the revelations of government spying have hurt relations with the tech community. Or, watch a video of the whole interview.