Upgraded Moto E from Motorola gets LTE, more storage, but little else 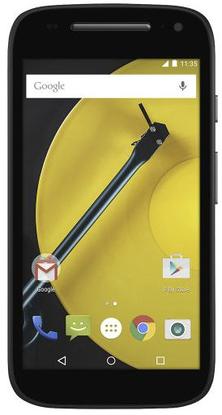 The new Moto E from Motorola looks a lot like its predecessor, according to a product page posted by Best Buy.

The upgraded US$99 Motorola Moto E will get LTE and twice the onboard storage as the previous version, but users will also have to make do with a low-resolution screen and front camera, at least if Best Buy is to be believed.

The retailer has posted a product page for the smartphone, saying that it will start shipping soon in the U.S. on Sprint's network. Motorola hasn't yet officially announced the smartphone.

That the Android Lollipop-based Moto E is getting LTE isn't too much of a surprise. New chipsets from the likes of Qualcomm and MediaTek have laid the groundwork for low-cost models with faster network connections. In an interview in December, an executive at telecom operator Orange said prices on 4G smartphones would probably get as low as $60 without a contract or subsidies by the end of the year.

The specifications detailed by Best Buy also includes a 4.5-inch, 540 x 960-pixel screen and an unspecified 1.2GHz quad-core processor from Qualcomm. The original Moto E has a 1.2GHz dual-core processor and a 4.3-inch screen with the same resolution.

That the model hasn't got an HD screen is a disappointment, but the unfortunate fact is that 720p screens still seem a bit too expensive for smartphones in the $100 price range. But prices are dropping fast according to market research company IHS, so that will change sooner rather than later.

The upgraded Moto E's specifications also list 8GB of storage that can be expanded by up to 32GB using a microSD card and 1GB or RAM. It still has a 5-megapixel main camera and a VGA front facing. The original model lacked a front facing camera altogether, but the low resolution is still a let-down. There are competing products that improve on that, so here Motorola could have done better.

But in the end, the smartphone nicely sums up what can be expected from new smartphones this year. While nothing revolutionary is anticipated, the steady pace of product evolution will nevertheless result in some good devices.

With the launch of the Moto E and G, Motorola redefined how low-end smartphones should look and perform and in the process the company also saved itself. But competition in this segment is on the rise, and success this time is far from certain.