For the past decade, the tape industry has been re-architecting itself and the renaissance is well underway 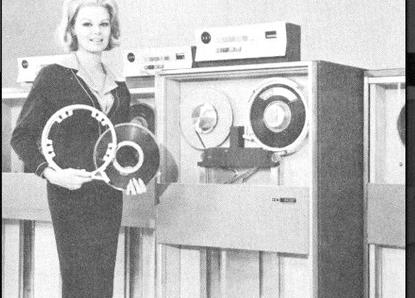 FLASHBACK: Data on Tape - The UNIVAC I (1951) started a new trend in data storage: magnetic tape. IBM soon began using reels of magnetic tape (similar to the audio tape of the time) for computer data storage, and the rest of the industry followed suit. Computer tape, usually stored in open reels, generally consisted of thin strips of plastic coated with a magnetically sensitive substance that computers wrote to and read from by means of electronic heads embedded in a special tape drive.

Tape storage, which at one point in time not very long ago was projected to be on the decline, has seen a strong rebound according to The Tape Storage Council (TSC).

It claims the role tape serves in today's modern datacentres is expanding as IT executives and Cloud service providers address new applications for tape that leverage its significant operational and cost advantages.

The memo provides a detailed look at the tape storage industry and the strong growth within it in the past year. It emphasises how tape is addressing new markets as capacity, performance and functionality reach new levels.

It is reproduced in full as follows.

For the past decade, the tape industry has been re-architecting itself and the renaissance is well underway. Several new and important technologies for both LTO and enterprise tape products have yielded unprecedented cartridge capacity increases, much longer media life, improved bit error rates, and vastly superior economics compared to any previous tape or disk technology. This progress has enabled tape to effectively address many new data intensive market opportunities in addition to its traditional role as a backup device such as archive, big data, compliance, entertainment and surveillance. Clearly disk technology has been advancing, but the progress in tape has been even greater over the past 10 years. Today's modern tape technology is nothing like the tape of the past.

Growth in Tape Demand for tape is being fuelled by unrelenting data growth, significant technological advancements, tape's highly favorable economics, the growing requirements to maintain access to data 'forever' emanating from regulatory, compliance or governance requirements, and the big data demand for large amounts of data to be analyzed and monetized in the future. The Digital Universe study suggests that the world's information is doubling every two years and much of this data is most cost-effectively stored on tape.

Enterprise tape has reached an unprecedented 10TB native capacity with data rates reaching 360MB/s. Enterprise tape libraries can scale beyond one exabyte. Enterprise tape manufacturers IBM and Oracle StorageTek have signaled future cartridge capacities far beyond 10TB with no limitations in sight. Open systems users can now store more than 300 Blu-ray quality movies with the LTO-6 2.5TB cartridge. In the future, an LTO-10 cartridge will hold over 14,400 Blu-ray movies. Nearly 250 million LTO tape cartridges have been shipped since the format's inception. This equals over 100,000PB of data protected and retained using LTO technology. The innovative active archive solution combining tape with low-cost NAS storage and LTFS is gaining momentum for open systems users.

Recent Announcements and Milestones Tape storage is addressing many new applications in today's modern data centers while offering welcome relief from constant IT budget pressures. Tape is also extending its reach to the cloud as a cost-effective deep archive service. In addition, numerous analyst studies confirm the TCO for tape is much lower than disk when it comes to backup and data archiving applications. See TCO studies section below.

Development and manufacturing investment in tape library, drive, media and management software has effectively addressed the constant demand for improved reliability, higher capacity, power efficiency, ease of use and the lowest cost per GB of any storage solution.

LTFS changes rules for tape access Compared to previous proprietary solutions, LTFS is an open tape format that stores files in application-independent, self-describing fashion, enabling the simple interchange of content across multiple platforms and workflows. LTFS is also being deployed in several innovative 'Tape as NAS' active archive solutions that combine the cost benefits of tape with the ease of use and fast access times of NAS. The SNIA LTFS Technical Working Group has been formed to broaden cross-industry collaboration and continued technical development of the LTFS specification.

According to the Brad Johns Consulting Group, a TCO study for an LTFS-based 'Tape as NAS' solution totalled $US1.1 million compared with $US7.0 million for a disk-based unified storage solution. This equates to a savings of over $US5.9 million over a 10-year period, which is more than 84 per cent less than the equivalent amount for a storage system built on a 4TB HDD drive unified storage system. From a slightly different perspective, this is a TCO savings of over $US2900/TB of data. (Source: Johns, B. A New Approach to Lowering the Cost of Storing File Archive Information, Brad Johns Consulting Group, April 2013)

Another comprehensive TCO study by ESG (Enterprise Strategies Group) comparing an LTO-5 tape library system with a low-cost SATA disk system for backup using de-duplication (best case for disk) shows that disk deduplication has a 2-4x higher TCO than the tape system for backup over a 5-year period. The study revealed that disk has a TCO of 15x higher than tape for long-term data archiving. (Source: A Comparative TCO Study: VTLs and Physical Tape, by ESG)

CyArk (case study) is a non-profit foundation focused on the digital preservation of cultural heritage sites including places such as Mt. Rushmore, and Pompeii. It predicted that their data archive would grow by 30 per cent each year for the foreseeable future reaching one to two petabytes in five years. They needed a storage solution that was secure, scalable, and more cost-effective to provide the longevity required for these important historical assets. To meet this challenge CyArk implemented an active archive solution featuring LTO and LTFS technologies.

LA Kings (case study) of the NHL rely extensively on digital video assets for marketing activities with team partners and for its broadcast affiliation with Fox Sports. Today, the Kings save about 200GB of video per game for an 82 game regular season and are on pace to generate about 32-35TB of new data per season. The King's chose to implement Fujifilm's Dternity NAS active archive appliance, an open LTFS based architecture. The Kings wanted an open source archiving solution which could outlast its original hardware while maintaining data integrity. Today with Dternity and LTFS, they don't have to decide what data to keep because they are able to cost-effectively save everything they might need in the future.

McDonald 's primary challenge (case study) was to create a digital video workflow that streamlines the management and distribution of their global video assets for their video production and post-production environment. McDonald's implemented the Spectra Logic Corporation's T200 tape library with LTO-6 providing 250TB of video production storage. Nightly, incremental backup jobs store their media assets into separate disk and LTO-6 storage pools for easy backup, tracking and fast retrieval. This system design allows McDonald's to effectively separate and manage their assets through the use of customized automation and data service policies.

NCSA (case study) employs an Active Archive solution providing 100% of the nearline storage for the NCSA Blue Waters supercomputers, which is one of the world's largest active file repositories stored on high capacity, highly reliable enterprise tape media. Using an active archive system along with enterprise tape and RAIT (Redundant Arrays of Inexpensive Tape) eliminates the need to duplicate tape data, which has led to cost savings.

Looking ahead to 2015 and beyond

The role tape serves in today's modern datacentres is expanding as IT executives and Cloud service providers address new applications for tape that leverage its significant operational and cost advantages.

This recognition is driving investment in new tape technologies and innovations with extended roadmaps, and it is expanding tape's profile from its historical role in backup to one that includes long-term archiving requiring cost-effective access to enormous quantities of stored data.

Given the current and future trajectory of tape technology, data intensive markets such as big data, broadcast and entertainment, archive, scientific research, oil and gas exploration, surveillance, cloud, and HPC are expected to become significant beneficiaries of tape's continued progress.

Clearly the tremendous innovation, compelling value proposition and development activities demonstrate tape technology is not sitting still; expect this promising trend to continue in 2015 and beyond.