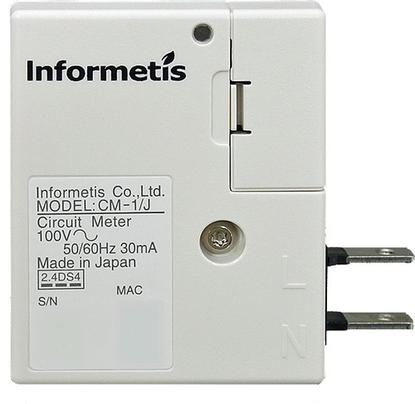 A sensor developed by Sony spinoff company Informetis gathers data for home electricity monitoring. Cloud-based machine learning algorithms crunch the data to chart how much juice major appliances are using, and the results are sent to a mobile app.

What happens to robots when they die? If you're Sony's defunct robot dog Aibo, your technology can return to life in smart homes.

Sony put its sophisticated robot to sleep in 2006 as part of a cost-cutting drive, but a startup spun off by the manufacturer is now using its artificial intelligence to monitor electricity use.

Tokyo-based Informetis is set to begin trials of a sensor, based on algorithms that helped Aibo understand speech, to continuously monitor the current and voltage going into a home or business. The technology can generate an itemized list of how power is being used.

Users could benefit by seeing a detailed account of electricity use by appliance, which could help them save money by consuming less power. They can also use the app to monitor power use when they're away from home, including identifying potential fire hazards such as irons left on.

"Electricity waves are surprisingly very similar to sound," said Josh Honda, a new hire at Informetis for global marketing. "How Aibo was distinguishing the commands it was getting from its owner -- that part of the analysis is the foundation of what we're doing in trying to separate or disaggregate the electricity into different components."

During a recent demonstration, a prototype sensor the size of a pack of cigarettes was attached to a power distribution board on the wall at Informetis. Data gathered by the sensor was sent to a Wi-Fi router, crunched in the cloud and then sent to a TV screen. Electricity used by appliances and lighting was displayed, and when an air purifier and table lamp were turned on, they also appeared.

Informetis has been selling an early version of the sensor to businesses in Japan. It can detect the electricity consumption for appliances such as microwaves, washing machines and refrigerators but not juice-sippers like phone chargers. It can distinguish the type of appliance but not the model.

When the data is uploaded to the cloud, an original codec is used for compression. Then, machine-learning algorithms based on those used for Aibo's speech recognition analyze the waveforms in the data and look for telltale signatures for appliances such as refrigerators using more power at regular intervals.

While currently only about 80 percent accurate, the sensor can provide a useful picture of what's going on in a home or business.

"Current smart meters cannot do this," said Informetis CEO Taro Tadano, a former Sony engineer. "But smart meters have the capability -- those equipped with a firmware version of our sensor can do it."

In the future, the data could also be used for security, assisted living or even healthcare and marketing, Tadano said, adding that simply seeing a regular, itemized view of power use can lead to electricity savings of roughly 10 percent if consumers change their habits.

A number of other companies such as Belgium-based Smappee, which also claims 80 percent accuracy, have also developed home power monitors that crunch data in the cloud. Informetis says its solution has a labelling function that automatically identifies up to six commonly used appliances.

Informetis is testing a firmware version of the sensor with a Japanese smart meter maker as part of a government-backed project. Meanwhile, it has partnered with Tokyo Electric Power (Tepco) to conduct a year-long trial of the sensor in about 300 homes and 20 businesses in Japan beginning next month.

Established in 2013 and majority owned by private equity firm JAFCO, Informetis hopes to sell its sensor to power companies. It won't say how much it could cost, though it would likely charge for monthly power analysis.

It's eyeing the 2016 deregulation of Japan's power market, which follows decades of dominance by Tepco and other regional monopolies. Upstart energy retailers could try to distinguish themselves by offering detailed power breakdowns using Informetis sensors or firmware. The company also hopes to roll out the technology in Europe this year.