The content could give a lift to Google in mobile search 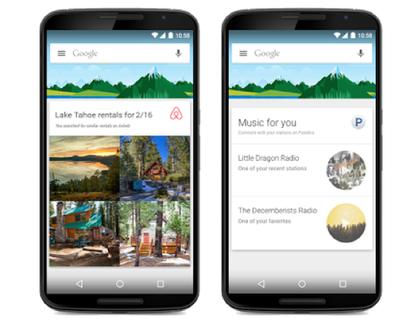 The latest update to Google Now on Android is a big one, with data from outside apps like Airbnb and Lyft fed in.

Google Now just got a lot smarter, adding data from dozens of outside apps to help people get more things done as they go about their day.

Google Now is a search tool and digital assistant built into Android devices and the Chrome browser, and included as part of the Google search app for iOS. Until now it's served up information about the weather, restaurant reservations, shipping notifications and nearby events based on people's past Google searches and reading their Gmail messages. The content is presented as "cards" that users can swipe through and dismiss as they please. The idea is to present helpful information, sometimes before people know they need it.

Now, a much wider variety of cards will be incorporated into the Android version of the app, including for the first time information from third-party apps like Pandora, Airbnb, Lyft, and real estate database Zillow -- provided a user has those apps installed. Adding more of those cards will make it faster to get information from the other apps, and perhaps make them more useful.

Take this example for Airbnb: A person uses Google search to plan a trip but can't decide right away where to book. Later, after opening the Google Now app, a card from Airbnb appears for the location and dates researched, helping the person choose a place to stay. Or if a person who uses Lyft lands at an airport, Google Now can offer to order them a ride.

The integrations could lead to more use of Google Now, provided the suggestions are useful and not annoying. And they could address a mounting challenge for Google -- that people are getting more and more information from apps rather than searching the web.

Google's share of U.S. mobile search ad spending could fall to 64 percent this year, research company eMarketer said in a report last June, down from 83 percent in 2012, while Yelp's share was expected to grow.

The more than two dozen new cards will roll out over the next few weeks, Google said, with more on the way. Plans for bringing the new cards to iOS were not announced.