The app is geared toward people in less connected areas 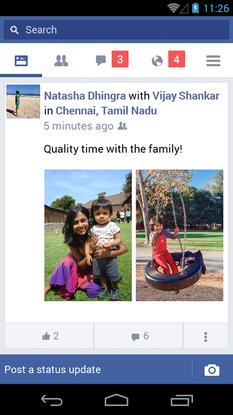 Facebook is testing a stripped down version of its mobile app that requires far less data, which could help increase usage of the social networking service among people with weaker Internet service or older phones.

Facebook "Lite" is available for devices running Android 2.2 and up. The size of the free app is 252 kilobytes, and it's meant for 2G networks in areas with limited connectivity. Users can perform a bunch of basic functions like post status updates with photos, comment on people's posts, message friends, have group conversations, and receive notifications. Posts from the news feed are meant to load quickly.

Early reviews on the Google Play store for the app have been positive, with many praising its low data and battery usage.

The Lite app appears to be related to Facebook's Internet.org project, which seeks to provide free access to Facebook and other basic Internet services in developing countries. The Internet.org app is already available in a handful of countries such as Zambia, Tanzania, Kenya and Colombia. In addition to Facebook, the app provides access to other services like the weather, Wikipedia, and health and educational information. Carriers can charge users for paid access to other services. In addition to Facebook, other founding partners of Internet.org include Ericsson, Nokia and Samsung.

With the Lite app, Facebook might be testing people's responsiveness to a set of basic Facebook services without the ancillary ones. It may also help Facebook learn how it could further improve the functions of its Internet.org app.

Facebook tested a different stripped down version of its site in late 2009 and early 2010, although only for the desktop. It was shut down in April 2010.