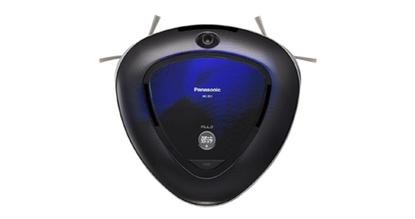 Panasonic's Rulo robot vacuum cleaner has a triangular shape to get into corners.

Panasonic has entered the robot vacuum market with a pricey wedge-shaped droid that gets deep into corners.

The MC-RS1 Rulo has a roughly triangular shape with rounded sides and corners and a dust sensor that are designed to help it do a better job at cleaning up than rival robots, according to the company.

The unit can move from side to side in tight spots while attacking dirt with two rotating brushes that stick out from its corners. They push dirt toward a cylindrical sweeper on the underside of the robot, which can tackle various floor types including tatami mats commonly used in Japan.

"The Rulo triangle shape was developed after years of R&D into vacuum cleaners," a Panasonic spokeswoman said via email. "It is the first in the industry to be equipped with a fully fledged v-shaped brush."

The dust sensor is designed to detect particles that are so fine as to be virtually invisible to the eye.

Rulo weighs 3kg (6.6 pounds) and is about 30cm (11.8 inches) across. It's equipped with ultrasonic and infrared sensors to help it navigate around obstacles and follow walls, which it combines with moving in random directions while covering a floor. It can operate for about an hour in automatic mode.

Rulo faces an uphill battle for share of the robot cleaning market, dominated by iRobot's Roomba line, which has sold millions of units worldwide. Panasonic, however, has a large appliance business and distribution channels in Japan and other countries. It's aiming to produce 5,000 Rulo robots per month.

The Rulo will go on sale in March in Japan, and is already listed on electronics retailer Yodobashi Camera's website for ¥107,780 (US$913), which is significantly more than high-end Roomba models on the site.