With Firefox OS for wearables, Mozilla wants to open up communication among all devices, regardless of OS 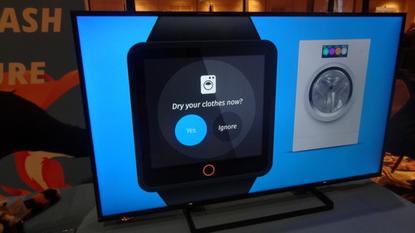 Mozilla is planning a version of the Firefox OS for wearables, and one of the top priorities is to break down barriers among smartwatches, smart glasses and other body-hugging devices based on Apple's and Google's operating systems.

The Firefox OS is already being used in low-cost smartphones, and will be used in 4K TVs released by Panasonic in 2015. Mozilla now wants to expand the OS to a wider range of devices, including wearables and home appliances, said Joe Cheng, manager of product and project management of the mobile devices group at Mozilla, in an interview on the sidelines of the CES conference.

It's important to push the OS into more Web-connected devices and to provide a consistent user experience, Cheng said.

The goal for the Firefox OS is to provide an underlying operating system for all mobile devices, TVs, appliances and wearables to easily communicate and exchange information with each other, Cheng said.

For users, the Firefox OS would provide an alternative to wearables being developed based on Google's Android Wear, or Apple's iOS, which will run on the upcoming Apple Watch. Firefox OS is already being used in low-cost handsets, and a version of the wearable OS could be attractive to low-cost smartwatch makers in countries like China, who sell products for under $100.

But there's a problem -- wearables with Android Wear can talk only with Android devices, and the upcoming Apple Watch is expected to exchange information only with the iPhone.

Mozilla wants to break that walled garden and make sure wearables with Firefox OS communicate with all devices, regardless of OS. The company is betting that its use of open-source technologies will make that possible.

"We want to break that single-brand barrier," Cheng said.

Cheng didn't provide a timeline for when the Firefox OS would reach wearables. The company, however, is talking with partners who may be interested in using the OS.

"We want to make sure what we're building is right for user instead of just another product on the market," Cheng said.

In an animated presentation, Mozilla demonstrated what a Firefox OS could bring to wearables. A smartwatch could receive a notification once a washing machine completed a cycle, or track fitness information that could then be passed on to smartphones -- a typical feature of current smartwatches on the market.

Firefox OS has struggled for adoption in smartphones, but had some success at CES, with Panasonic adopting it for TVs. The biggest asset in Firefox OS is the use of open-source technologies, which could make it attractive to hardware makers. But Firefox OS has been criticized for its slow speed on handsets, and it remains to be seen if Mozilla can create a truly competitive, lean OS for wearables.