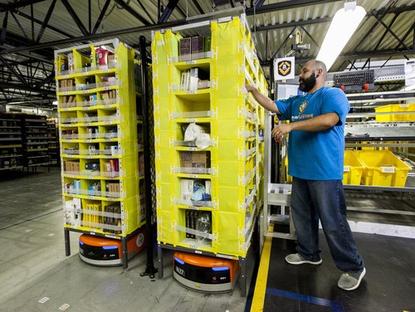 Amazon has added some additional robotic muscle and computer-vision chops to its warehouses ahead of the tide of holiday shopping orders.

The retailing giant said Monday it has 10 of these latest fulfillment centers in operation across the U.S., featuring software and mechanical innovations.

The total number of Kiva mobile robots, which transport large vertical racks containing inventory, has topped 15,000 across the U.S., Amazon said Monday. The company agreed to buy Kiva Systems in 2012 and has been adding robot platforms to its warehouses to improve efficiency.

Amazon also said it had deployed an inventory-moving robotic arm dubbed Robo-Stow, which according to a press photo is an M-2000iA, made by Japan's Fanuc robotics. The machine is billed as the strongest of its kind in the world, with a lifting capacity of 1,200 kilograms, enough to move car bodies around factories.

A number of companies are using robots on the shop floor and in other areas to make their operations more efficient. Contract manufacturer Foxconn, for example, uses robots to assemble some of its products.

Japanese mobile carrier SoftBank has introduced its humanoid robot Pepper, which was developed by French subsidiary Aldebaran Robotics, at its smartphone stores in Japan. On Monday, Pepper also began selling coffee machines for Nestle at an electronics store in Tokyo, the first of a planned 1,000 Nestle distributors in Japan to have robotic pitchmen.

Amazon is also using new computer vision systems that help complete the unloading and receipt of a trailer of inventory in only 30 minutes compared to hours without using such systems. Human workers, meanwhile, are using "new, high-end, graphically oriented computer systems" while filling orders.

The company, which will hire 80,000 seasonal employees to process holiday orders, did not immediately respond to a request for more information about the warehouse improvements.