Dozens of antivirus programs are missing Getmypass, which is similar to BlackPOS 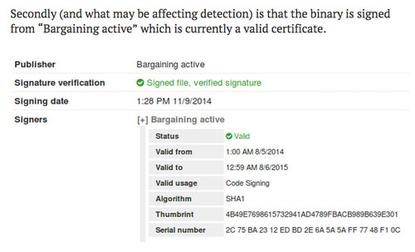 Few antivirus programs were detecting Getmypass, a type of POS malware that has a digital certificate.

A security researcher came across what appears to be a new family of point-of-sale malware that few antivirus programs were detecting.

That type of malware has been responsible for large payment card breaches at Target, Neiman Marcus and others, capitalizing on a common weakness in systems that experts say can be fixed with more robust encryption of card details.

Hoffman wrote that Getmypass appears to still be under development. It does not, for example, yet have a command-and-control functionality, which is a way that hackers use to issue commands to the malware.

"Its important to track tools like this from their very young stages so that researchers can watch them develop and eventually grow into the next big tool," Hoffman wrote.

Some security programs may miss malware on an initial scan but flag it later for removal if it starts to do some suspicious, such as send data to a remote server.

Trend Micro, which also wrote up an analysis, said it appears the malware is similar to a variant of BlackPOS, a widely used RAM scraper.

Getmypass has functions common to other POS malware, such as the ability to search for credit card data and validate the data to ensure the numbers are valid payment card details.

But it lacks other common features, such the ability to log keystrokes, collect login credentials and move collected data to a non-local file, he wrote.

"This malware seems to be in its infancy," Hoffman wrote. "There are debug strings still existent in the malware indicate to me that the author is still testing the tool or is still actively developing it."

It does, however, carry a digital signing certificate from a publisher called "Bargaining active." Digital certificates are used to sign applications, which may give them a greater degree of legitimacy if scanned by security software.