Qualcomm to tap server market with the help of China

Qualcomm plans to co-develop the technology with Chinese partners 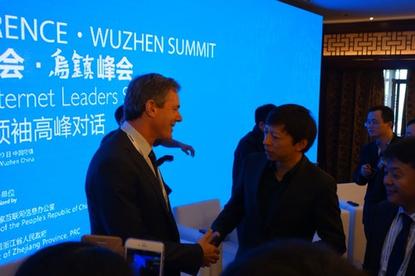 Qualcomm's Paul Jacobs at the World Internet Conference in China

Qualcomm wants to enter the server market, but it won't do it alone, and will tap expertise in China to build the low-power chips.

Jacobs made the comment while speaking at the World Internet Conference in Wuzhen, China. Qualcomm is best known as a maker of smartphone processors based on chip architecture from ARM Holdings, but the company wants to take a crack at the server market, which rival Intel has long dominated.

The new chips promise to use low power, and make Internet data centers even greener, Jacobs said. "That's in contrast to the way that the data centers are built right now. They are built with chipsets basically from one company, Intel, and they are quite high priced and they use tremendous amounts of power," he said. "We're going to change that."

Jacobs didn't mention which Chinese partners Qualcomm was working with. Back in September, he said the company was working with 90 different Chinese companies to deliver new products.

Also in July, the U.S. chip company announced that it had partnered with China's Semiconductor Manufacturing International Corporation to produce some Qualcomm Snapdragon processors, which are popularly used in smartphones across the world.

China isn't exactly known for its semiconductor technology. But the market has the world's largest online populace, at over 600 million, and is home to several Internet giants such as search engine provider Baidu, which has its own data centers.