At Slush in Helsinki, they discuss strategies for success 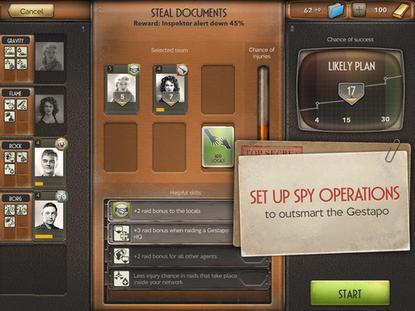 With the help of cowboys, robots and snipers, a trio of startups at the Slush startup conference in Helsinki is trying to find success in the mobile gaming space, which some think is just getting started.

The challenge in the rapidly changing sector is to develop a game that will be profitable in a year or two. To succeed, developers have to dare to look beyond the current sea of cartoony unicorns and knights, according to Lasse Seppänen, co-founder and CEO at PlayRaven.

"This market isn't mature, content-wise. We tested this with our first game, Spymaster, which came out globally in September," Seppänen told the audience at Slush.

Spymaster is a strategy game for iOS with a World War 2 theme that lets players control of a network of Allied undercover agents to undermine the Axis powers. After the launch it became a top 10 strategy game in 99 countries, alleviating any worries about its popularity that the company had during development.

"We felt this really validated our approach that you can try something different that isn't on the top lists yet ... I believe the really big successes for all of us are in building new categories of games with new visual styles, themes and game mechanics," Seppänen said.

The company is currently working on two games that will have soft launches in the first quarter of next year.

In Nano, which is just a working title, the player controls a flock of good robots that are trying to defeat the bad robots. The player controls the robots, which are very small, by clicking on the screen to make them move in a specific direction. Seppänen calls Nano a micro real-time strategy game.

"This game started in a rather unconventional way. Our lead programmer came back from his summer holiday and said he had developed a game, and showed a prototype on his phone," Seppänen said. The prototype was so addictive that it had to be developed, he added.

PlayRaven's other in-the-works game is an MMO (massively multiplayer online) game called Convoy Commander, which takes place in a post-apocalyptic America that's been covered by snow due to climate change. Players control a convoy of vehicles.

For now, the company is focused on just touch-controlled games for mobile devices, and not those using game controllers, keyboards or mice.

PlayRaven isn't the only company at Slush that's focusing on games for smartphones and tablets. Next Games and Super Evil Megacorp are going down that route as well.

"Mobile makes sense because it's the only growing platform really. [Becoming successful] definitely isn't easy, but it's a doable way of building your own business," said Teemu Huuhtanen, CEO at Next Games.

On Tuesday, the company launched the first game based on its own characters, called Compass Point: West. The goal is to ship the game in February on the Apple App Store, with an Android version to follow.

Super Evil Megacorp and its MOBA (multiplayer online battle arena) game Vainglory gained a lot attention when it was featured during Apple's September launch of the iPhone 6. The game, which pitches two teams of three players against each other, became available in North America, South America, Africa and the Middle East on Tuesday. It has been available in Europe since last week.

The game works on iPads from the second generation and up, and iPhone 6, iPhone 6 Plus, iPhone 5s.

"Apple's tablets, the iPhones and Android-based device are poised to take their position alongside PCs and consoles, and become primary devices for core gamers," said Heini Vesander, marketing director at Super Evil Megacorp.