NASA engineers and technicians have put the finishing touches on Orion, the spacecraft designed to take astronauts into deep space. 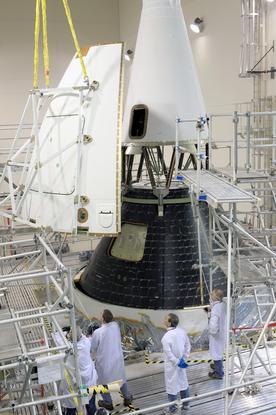 NASA Engineers installed a four-piece fairing over Orion a few weeks ago as one of the final major assembly steps for the spacecraft.

NASA engineers and technicians have put the finishing touches on Orion, the spacecraft designed to take astronauts into deep space.

last week's work marked the conclusion of construction on the first spacecraft designed to carry humans past the moon. The Orion spacecraft, which is expected to take humans to an asteroid and Mars, is scheduled to make its first test flight from Cape Canaveral Air Force Station on December 4.

NASA did not specify what the final work on Orion was.

A few weeks ago, NASA engineers installed Orion with a four-piece fairing -- panels designed to smooth the airflow over the cone-shaped spacecraft to limit sound and vibration, giving astronauts a smoother ride. And early this month, NASA installed the spacecraft's Launch Abort System, designed to act within milliseconds to pull the spacecraft and its crew away from a rocket in trouble.

Orion will be moved from its current home at the Kennedy Space Center in Florida to a launch pad in November. Then it will be lifted onto a Delta IV Heavy rocket in preparation for its initial test flight.

That first flight test will send Orion, without a crew onboard, 3,600 miles above Earth on a high-speed, two-orbit trip aimed at testing the spacecraft's heat shield and other critical systems.

The four-and-a-half-hour flight will have the spacecraft returning to Earth at speeds near 20,000 miles per hour and generating temperatures up to 4,000 degrees Fahrenheit.

Orion is expected to make a faster re-entry than any previous NASA craft capable of carrying humans.

"This is just the first of what will be a long line of exploration missions beyond low Earth orbit, and in a few years we will be sending our astronauts to destinations humans have never experienced," said Bill Hill, deputy associate administrator for Exploration Systems Development, in a statement. "It's thrilling to be a part of the journey now, at the beginning."

Orion is scheduled to make its first flight with astronauts aboard in 2021.