Bing lets you dig behind the smiley face with emoji search

Yahoo also offers the tool. Google, not yet 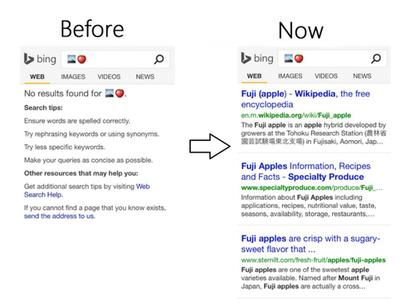 Bing now supports searches with emoji, meaning you can insert or paste a range of emoji icons like hearts, smiley faces, food graphics, or any combination thereof, for some interesting, though not always useful, results.

It's a novelty feature, yes, but still fun. And one that could help Bing draw at least some attention away from Google. Google at the moment does not give results for emoji searches, though its auto-complete technology does recognize them. Yahoo, meanwhile, does support emoji searches.

Bing's tool is available in all English markets, the search engine said, offered as an homage to the shorthand's popularity.

The function could be used to better understand the meaning of an emoji, Bing said. A search for the smiley face emoji did return a link to the Wikipedia page for laughter.

Some searches delivered results that were quite intelligent, and literal. A search combining an airplane with a helicopter returned the Wikipedia page for the Bell Boeing V-22 Osprey military aircraft, which looks like a helicopter and airplane in one.

It also returned, quite literally, a link to a Howstuffworks video on a weird airplane-helicopter hybrid.

The function worked well at deciphering the semantic meaning of some emojis, but required more work for local results. A search for the coffee emoji by itself returned mostly links to large companies like Starbucks and Dunkin' Donuts. But combine the emoji with the phrase "in New York," and plenty of local coffee shop results were displayed.

As for a heart emoji, in New York? A YouTube link to the Art Garfunkel song, "A Heart in New York," appeared, as did a link to the New York Heart Center, a cardiology practice.