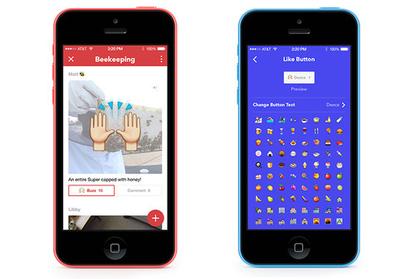 Facebook is going old-school, with a stand-alone app for discussion boards aimed at letting users talk about shared interests without having to use their real names.

The company released Rooms on Thursday, its answer to the craze around posting and sharing anonymously. People can use any name they want and do not need a Facebook account. The app contains rooms geared around various topics, all of which require an invite link to enter. Providing an email address is optional, for the purposes of having accessed rooms restored if the user deletes the app.

Currently the app is only available on iOS. Plans for other platforms like Android or Windows Phone were not disclosed.

The app is not just about anonymity. With it, Facebook hopes to provide a discussion board-type platform where people can chat about shared interests outside of their usual social circles. It's a concept that has been super popular since, oh, the Web's been around.

"One of the magical things about the early days of the web was connecting to people who you would never encounter otherwise in your daily life," Facebook said in a statement Thursday.

"From unique obsessions and unconventional hobbies, to personal finance and health-related issues -- you can celebrate the sides of yourself that you don't always show to your friends," the company said.

But the app's ability to succeed likely depends on the number and diversity of rooms created by its users, and whether the app's focus on visuals and photos appeals to them. There's also no desktop version.

The app was developed as part of Facebook's Creative Labs project, which has also released stand-alone apps like Slingshot and Paper.

I tried out the app, and was even able to use "Mark Zuckerberg" as my name. (A short "hello" post of mine then immediately generated several "high fives.")

Users gain access to rooms by taking photos of QR codes with their smartphone. The codes may be provided by the app itself, or by users' friends, or anywhere else on the Web. Users can store the QR codes in their phone's camera roll, and then give the app permission to access their camera roll.