Hillary Clinton: Social media is no match for real-world interactions 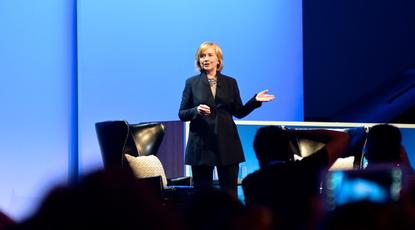 Former US Secretary of State, Hillary Clinton, sees value in social media and other technologies as tools for connecting people, but she feels their impact pales in comparison to in-person meetings when it comes to solving society's biggest problems.

Communication technologies like video-conferencing systems and social networking sites have made it easier for people to connect, but they're no substitute for face-to-face meetings and encounters, which are more valuable, she said.

"How do we maintain relationships when literally with a nanosecond of attention, you can be communicating with anybody around the world? But that's not necessarily relationship building," Clinton said Tuesday, during the Salesforce Dreamforce conference in San Francisco.

Whether you're using technology or not, "How do you create the trust that is at the core, the glue that holds societies together?" she said during an on-stage Q&A with Klaus Schwab, founder and executive chairman of the World Economic Forum.

Clinton supports technology use and development. She has spoken out against Internet censorship, and called for greater government spending on information technology. She's also no stranger to social media, where she's active on Twitter, Facebook and Instagram.

But, the fast-paced nature of tech innovation today, as well as the way consumers use services like social media, "has imposed an almost impulsive reactive pattern on decision making that argues against long-term decisions," Clinton said.

"We need more opportunities for people to sit and listen and talk with each other," she said. Some of America's greatest leaders, like Presidents Franklin Roosevelt, Harry Truman and Dwight Eisenhower succeeded by taking time out of their official schedules to meet with new people, Clinton said.

Today, the nonstop hamster wheel of fund raising has made it difficult for members of Congress to find the time to meet and get to know each other, let alone solve problems, Clinton said.

During the talk, Clinton also called again for an open Internet, and criticized oppressive regimes in other parts of the world "who want more control of the Internet, to shut it down at will, and interfere with people's freedoms."

Clinton, who is pondering a presidential run in 2016, is considered to be the likely Democratic nominee. She declined to answer a question from Schwab on her plans there. "I don't want to make any news today," she said with a smile.