In an Apple-style launch, French network operator Orange unveils its products for the next year 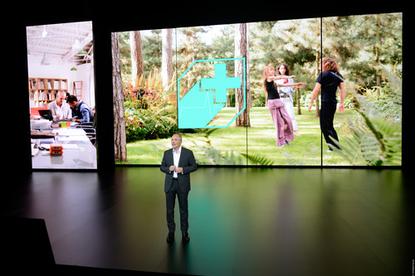 Everyone knows you shouldn't make Apple-to-Orange comparisons, but CEO Stéphane Richard was clearly playing up the similarities at the Palais de Chaillot theater in Paris on Thursday. In business casual attire, with just five giant video screens for company on stage, he spent nearly an hour hyping the products and services the company will offer businesses and consumers over the next year.

But this wasn't Apple: Its back-to-school extravaganza has come and gone. The star of this show was Orange, the French network operator.

Everyone knows you shouldn't make Apple-to-Orange comparisons, but CEO Stéphane Richard was clearly playing up the similarities at the Palais de Chaillot theater in Paris on Thursday. In business casual attire, with just five giant video screens for company on stage, he spent nearly an hour hyping the products and services the company will offer businesses and consumers over the next year.

The hardware highlight of the show was Homepoint. About the size of a couple of stacked CD boxes, this squat black square houses a Qi wireless charging pad for compatible smartphones, and two USB ports each capable of delivering 1.5 amps, enough to power a tablet. There's also an SD Card slot from which media can be streamed to screens around the home, and a Bluetooth connection that can pair with up to four devices to stream audio from them to a hi-fi through the 3.5mm audio jack.

The Homepoint also has a button for initiating WPS (Wi-Fi Protected Setup) secure Wi-Fi connections for visitors, who can then access the Internet but not content on the home network. Homepoint will go on sale in November for under €80 (US$100), Richard said, but it's hard to say who will pay for its curious mishmash of features.

The emphasis on streaming media continued with Project Polaris, which will allow users of Orange's video on demand, streaming TV, music and gaming services to begin watching or playing on, say, the TV, hit pause, and then resume where they left off on their phone, tablet or PC. "It's a common interface for all screens," and will be available by year-end, said Richard.

As if that weren't enough to watch, Netflix will be available through Orange's set-top box in France from November, Richard said. The company is playing catch-up with its smaller rival, Bouygues Telecom, which introduced Netflix to its subscribers last month.

With its home automation and monitoring service, Homelive, Orange is following in the footsteps of another rival, SFR, which upgraded its Homebox range in May. There's a fundamental difference between the two, according to an Orange employee demonstrating the products: "Our offering is open, and SFR's is proprietary. That means we can offer the best connected objects at any given time." Orange will launch its €9.99/month service on Oct. 23, with smoke detectors, motion detectors, weather stations, power controllers and other devices from partners including Philips, Netatmo and Fibaro.

Orange also announced a wad of new mobile money services and a two-factor authentication service that any app developer or webmaster can incorporate into his offering.

Mobile Connect, the authentication service, relies on the SIM card in a mobile phone for its security. To secure a transaction, a notification is sent to the phone, which then requests a password. This is compared with an encrypted version in the SIM, and not saved by the websites or the service. Once the transaction is authenticated, the requesting site or app is informed, and the connection secured. The service will open in the first quarter next year, Orange said.

The mobile payment services included an extension of the Orange Cash mobile payment service to three new cities in France this month. It has already been tested in Strasbourg and in Caen, the center of the French secure payments industry. Orange's Polish subsidiary will move into banking services by year-end with Orange Finanse, an app for Android, iOS and Windows Phone. The company is also partnering with a startup it supported, Afrimarket, to allow Orange customers in France to directly purchase goods for friends and relatives in Africa, rather than remit money that might used for purposes other than that the donor intended.

There were a few other gadget launches. Pops is a battery-powered M2M (machine-to-machine) device used by two Orange partners to develop new services. One, from Cityzen Science, allows the creation of smart clothing that can monitor its wearers' movements and vital signs, and deliver data to a number of health applications. The other, from Quiksilver, will allow surfers to get weather updates from their board, without their smartphone getting wet. Richard showed a long video of dancers tracking their rehearsals and performance with the Pops.

Then there was Orange Beacon, a Bluetooth Low Energy device for retailers and museums, which will go on sale shortly for around €40, and Express Download Station, a Wi-Fi kiosk for airline passengers who forgot to copy the latest movie onto their tablet before heading for the airport. Orange will partner with SITA, the air transport IT company, to put those in airports from next year.

Orange pulled out all the stops for the show, but Richard's sense of timing is nothing compared to that of Steve Jobs or successor Tim Cook. The computers driving the five giant screens behind him were often out of sync, and crashed several times. And some of the products he announced won't deliver the performance he touted until 2016 or later, when phones and tablets with 802.11ad Wi-Fi are common.

Oh, and that one more thing? It wasn't a new product at all, but a live contemporary dance performance filmed by a drone. The dancers were the same ones previously shown on video testing motion capture suits equipped with Pops M2M devices, and the video projectors, when they weren't showing the fuzzy view from the drone, purported to show the performance re-created from all that motion capture data.

Except that its timing was off too: The dancers' movements were alternately lagging and leading their digital alter egos, recalling the way Orange's new products are a mix of market followers and intriguing innovations.