Small and medium-size businesses should look into sharing cyber defenses, he says 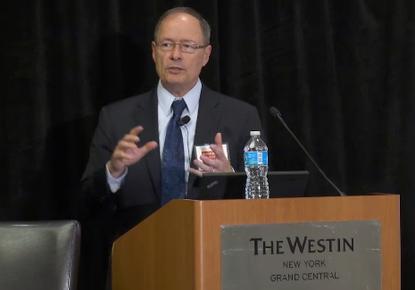 General Keith Alexander, retired director of the U.S. National Security Agency, calls on small and medium-sized U.S. businesses to work together on cybersecurity during a speech at a PwC event.

Small and medium-size U.S. companies should band together on cybersecurity systems as a way to pool limited resources against increasingly sophisticated attackers, the former director of the U.S. National Security Agency said Tuesday.

U.S. companies should explore ways to share more cyberthreat information with each other and work together to buy cybersecurity defenses as a service, said General Keith Alexander, who retired as director of the NSA and commander of cyber defense agency U.S. Cyber Command in April.

For smaller companies, "I think we're going to have to go to something like cybersecurity as a service, where they can opt in," Alexander said during a cybersecurity discussion in New York City hosted by PwC. "If the small and mid-sized companies are grouped together, where it's economically feasible to give them a great capability, then they aren't the downstream problem for the large banks. In fact, they become a part of the sensing fabric that helps protect the big banks or big industries."

"There are big companies that can afford big cybersecurity teams, have the funding to pay for them," he said. "Then, if you're mid-sized, you can afford to have a mid-sized team or less -- we'll call that the economy team. If you're a small [business], you know what cybersecurity is, and wish you had some. You have ... an IT guy who went to a class at night."

Alexander, during his speech, largely sidestepped the NSA's surveillance of U.S. companies and its work to defeat encryption systems. Those NSA efforts came to light in the past 15 months through leaks by former NSA contractor Edward Snowden.

He called on the U.S. Congress to pass controversial cyberthreat sharing legislation that would allow government agencies and private companies to more easily exchange information about attacks. Many privacy groups have protested the legislation, saying it would give government agencies, including the NSA, access to even more personal information held by private companies.

The cyberthreat information sharing bills in Congress have stalled this year because of privacy concerns.

"We have to have a messaging framework and capability that shares information among sectors at network speed," Alexander said. "It's technically feasible and something we should try for."

Alexander also suggested that too many companies rely on their chief information security officers (CISOs) or CTOs to keep up with the rapidly changing IT field and integrate what can be hundreds of IT products from dozens of vendors. One employee or small department cannot keep up with the changes and be expected to integrate all those products without exposing the company to cybersecurity risks, he said.

"Who's responsible for integrating all of that?" he said. "If the answer is the CISO, what we've done is ... given that person the hardest job. They're doing a day job; they don't have time to track technology. That's a broken situation."