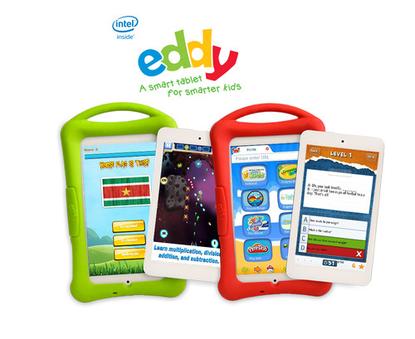 Intel has teamed with Indian education startup Metis Learning on an Android tablet that aims to keep children away from violent TV content and games on their parents' smartphones.

Targeted at children aged 2-10 years, Eddy is priced at Indian rupees 9999 (US$163), and comes with over 160 apps selected by educators and experts to accelerate a child's social, emotional and cognitive development, Intel said.

All content on the tablet is violence free, Intel said. The children's market in India is seen as a large opportunity as most makers of tablets and other devices, targeting the education segment, have so far focused on higher education, said Bharat Gulia, co-founder of Metis.

Eddy is initially targeted at children from middle and upper-middle class homes, with knowledge of English, but the plan is to also look at content in Indian languages.

India's tablet market was 860,000 units in the second quarter of this year, according to IDC. Android was the preferred operating system with close to 90 percent share.

The device has a scratch proof, impact resistant 7-inch multitouch capacitive 1024x600-pixel display, with a UV-ray protective layer to make it safe for childrens' eyes. The tablet has an internal storage of 16GB which can be expanded to 32GB. It has 2-megapixels front and rear cameras.

The tablet is being sold through Amazon India, and will have launch discounts and offers worth rupees 4,500. Eddy will be initially sold exclusively online, but Metis plans to also sell it through brick-and-mortar stores, Gulia said.

The tablets are being manufactured for Metis by a contract manufacturer in China. The company expects sales of about 400,000 yearly.