Samsung's Gear S gives the people what (they think) they want

A standalone smartwatch sounds wonderful, as long as you don't think about it too much. 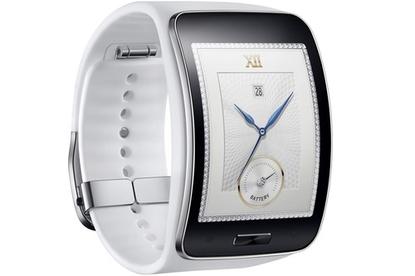 On the face of it, Samsung's Gear S smartwatch seems kind of ridiculous.

Its tall, curved display and front-mounted home button give it the appearance of a warped, miniaturized smartphone. And that's basically what it is, with a built-in cellular radio for phone-free voice calls and Internet use. Conventional wisdom in the tech world holds that this is not what people want in a wearable.

And yet, whenever I talk to people who spot a smartwatch on my wrist, they claim to want exactly what Samsung is selling. The two first things they ask me, without fail, is whether my watch can make calls, and whether it can get online without a phone connection. The watch I'm wearing currently, Samsung's Gear Live , does neither of these things, and I can see the disappointment creep onto people's faces when I give them the news.

In other words, Samsung is giving the people what they think they want. Unfortunately, the people appear to want something impractical.

Making phone calls from your wrist sounds great in theory--it's that sci-fi future that Samsung believes it's realized--except that it offers no privacy. You probably don't want all your calls to happen on speakerphone when other people are around.

There's also the issue of trying to run watered-down smartphone apps--of which Samsung's Tizen platform has more than 1,000--on a small smartphone screen. Again, doing so might be reasonable in short burts, when you still have your smartphone nearby as backup. But it could quickly lead to frustration if you can't fall back to a smartphone's larger display and full-blown app store.

Battery life will likely be an issue as well. Today's touch screen smartwatches barely last more than a day on a charge, and that's with just periodic, short-term use. Although Samsung says the Gear S lasts for two days on a charge, users will likely have to be conservative to make it through the day.

Perhaps I'm thinking about this the wrong way. Perhaps the Gear S isn't supposed to be a full smartphone replacement, but rather something that can temporarily stand in when your phone is out of reach. That would address most of the above issues, but here's the problem: the current wireless market isn't set up for this kind device--at least not in the United States.

If you wanted to use the Gear S today, you'd have to swap in your smartphone's SIM card--thus replacing your phone entirely--or get an entirely new SIM card with its own voice, text and data plan, and its own phone number. U.S. carriers won't let you spread your unlimited calls and text messages across devices, and most of them make you pay a monthly fee just to tap into your existing data plan. (The exception is T-Mobile, which offers 200MB free on tablets.) For a new line, you're looking at upwards of $50 per month.

Unless Samsung convinces carriers to change their ways, or someone solves the inherent problems with replacing your phone completely, the standalone smartwatch will be an expensive, unwanted luxury. Maybe the Gear S will help people realize that.