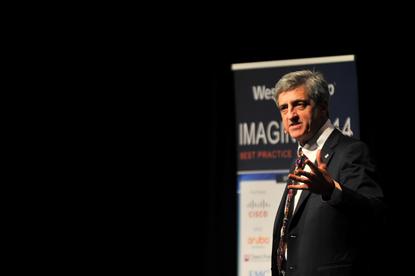 More than just technology, experienced and knowledgeable leadership is mandatory for the survival of IT companies due to the uncertainties and potential risks of technology, according to Richard de Crespigny.

De Crespigny is a pilot turned hero for his role in preventing the deaths of about 440 passengers of Qantas Flight QF32 on November 3, 2010. The Airbus A380 he was piloting at the time faced an uncontained (and, at the time, unexplained) engine failure after a turbine disc disintegrated and subsequently caused extensive damage to the aircraft.

Speaking at Westcon Group Imagine 2014 conference in Sydney and using his experience on QF32 as an extended analogy, de Crespigny said leaders need resilience is key to surviving in a globalised world where convergent technologies have innovated people, economies, and cultures; where the industry has moved from PCs to tablets to thin clients on the front end, and client servers to virtual servers to Cloud services in the back.

He claims that while technology is an enabler, an over-reliance can lead to bad security (in which he does not refer specifically to information security, but operational security).

While organisations tend to avoid risk, de Crespigny warns that it is not like taking a gamble, and can therefore prove beneficial.

“As Cisco CEO, John Chambers, said, our industry is now one of constant disruptions, so get used to it. Anyone in your company can influence not just the value of your own business, but the vendors which supply the products.

“Resilience is the key to surviving in this new chaotic world where we can expect the unexpected, but you need to be fearless enough to be bulletproof, but not gun shy.

“When you get that totally unexpected black swan, how do you manage it? How are you going to survive?”

By example, de Crespigny said the black swan of the IT industry will be when the Internet crashes.

“People say ‘the Internet can’t crash, Cisco has these wonderful routers’. When it does happen, if you haven’t considered for it – built a resilient plan for it – that will be your black swan event.”

Amid a black swan, the correct leadership minuses panic across all levels of an organisations by ensuring it does not spread.

“Instead of looking at everything that was going wrong, we looked at what was still right [during the QF32 black swan].”

“There was so much damage that mission controllers didn’t know what to do. We forgot what had failed, and focused on what was working. That changed the whole atmosphere.”

In the IT world, engineers must consider which elements of Cloud services remain operational and available, rather than tunnelling on failed servers.

With ‘value-add’ and ‘trusted advisor’ well and truly becoming the (rightful) buzz terms for resellers, de Crespigny said a personal guarantee needs to be wrapped around services as it provides reassurance for customers in case of crisis.