The satellites will compete with Google's Skybox Imaging 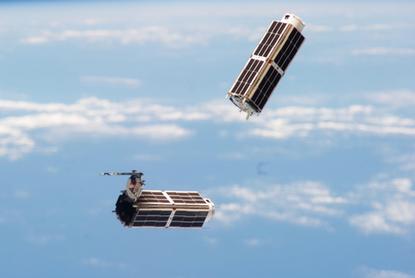 A San Francisco startup that wants to provide daily updated satellite views of the entire planet has begun launching its second batch of satellites.

The first pair of Planet Labs' "Flock 1b" constellation of imaging satellites was released from the International Space Station on Aug. 19 and eight more have followed in the past few days, according to orbital tracking data published by the U.S. Strategic Command.

The company did not respond to several requests for comment, although one of the company's engineers confirmed the releases on Twitter.

Planet Labs launched its first batch of 28 satellites earlier this year and Flock 1b will consist of 28 more, according to data submitted to the U.S. Federal Communications Commission. A third batch of 11 satellites called "Flock 1c" is also planned.

The company's satellites have a resolution of around 4 meters, which means they can see objects about the size of a car but not smaller. The images will likely be useful for monitoring deforestation, tracking the aftermath of natural disasters and other agricultural applications.

Skybox Imaging, a Silicon Valley startup acquired earlier this year by Google, is launching a fleet of satellites that have a resolution of about 80 centimeters -- making them five times sharper than the Planet Labs pictures.

Both those are nowhere near the 30-centimeter resolution that will be offered by WorldView-3, a recently launched satellite put into space by DigitalGlobe. The satellite is due to enter service later this year, and relaxed laws will allow DigitalGlobe to sell the 30-centimeter-resolution imagery to commercial customers like Google, Bing and Nokia from early next year. Previously, U.S. regulations had restricted imagery below 50 centimeters to U.S. government customers.

Planet Labs was formed by several former NASA engineers. It eventually hopes to have more than 100 satellites in space capturing imaging of every spot on Earth at least once every 24 hours. It's announced US$65.1 million in venture financing.