The deal was reached after talks with Google cooled, The Wall Street Journal said 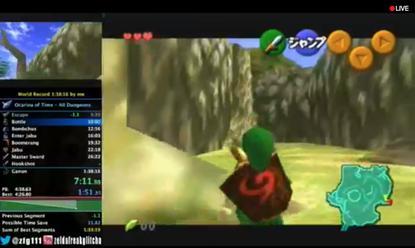 A Twitch live stream of a session of The Legend of Zelda: Ocarina of Time.

Amazon will pay at least US$1 billion to acquire Twitch, a site for streaming video-game play, according to reports published Monday in The Wall Street Journal and The Information.

Amazon has agreed to acquire the 3-year-old company, the Journal said, and the deal could be announced Monday. The report in The Information, however, said the two are in late-stage talks.

Both reports gave the same dollar amount for the deal. Neither Amazon nor Twitch immediately responded to comment.

Google had reportedly been in talks to purchase the site, but in recent weeks those talks cooled, the WSJ said.