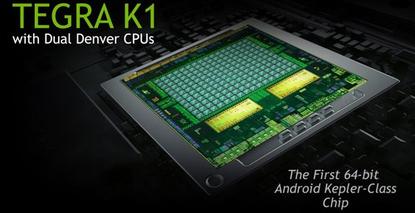 Apple pioneered the use of 64-bit processors in smartphones, but Nvidia claims its 64-bit Denver chip will be even faster when it appears in devices later this year.

Nvidia shared a few more details about Denver at the Hot Chips conference in Silicon Valley on Monday. It's calling it "the world's first 64-bit ARM processor for Android."

Denver will be used in a 64-bit version of Nvidia's Tegra K1 chip. It will have two custom CPU cores and 192 Kepler graphics cores, which Nvidia says will provide PC-like performance for laptops, tablets and high-end smartphones.

Like Apple's A7 chip, Denver is based on the ARMv8-A architecture.

Denver is "significantly outperforming" all its ARM-based rivals on benchmarks such as DMIPS and AnTuTu, Darrell Boggs, Nvidia's director of CPU architecture, told the Hot Chips crowd. One slide in his presentation specifically bragged that Denver performs faster than Apple's A7.

The chip isn't out yet though, of course, and there are no independent benchmark tests to verify his claims. So it remains to be seen if Nvidia will really out-gun Apple.

Denver will be Nvidia's first 64-bit CPU, and it's been a long time coming. Its project to build a 64-bit part was first announced in 2011, and Nvidia was originally targeting servers as well. It's now narrowed its focus to mobile devices.

Nvidia first discussed the Tegra K1 family at the International CES in January. There will be 32-bit and 64-bit variants, and they'll be pin compatible, so device makers can put them in the same socket, Boggs said. That should help them upgrade products to the 64-bit chip more quickly.

The Tegra K1's GPU cores are based on the Kepler architecture, which is also used in desktop graphics chips. It has a unified memory cache, meaning the CPU and GPU cores will share memory resources.

Most of today's smartphones and tablets use chips based on ARM designs. Apple was first to market with a 64-bit ARM processor, and Qualcomm and Mediatek have also announced 64-bit ARM parts.

The Tegra K1 better harnesses the combined power of CPUs and GPUs, according to Boggs. It will operate at clock speeds up to 2.5GHz and has a "superscalar" design that provides more execution pipelines, so tasks can be executed in fewer clock cycles. It also allows the CPUs and GPUs to communicate with other components faster.

Devices with the 64-bit Denver chip could be just around the corner. The 32-bit Tegra K1, based on ARM's Cortex-A15 design, is already offered in Nvidia's Shield Tablet and its Jetson K1 development board, as well as Acer's Chromebook 13.

The 64-bit Tegra K1 outperforms the 32-bit version by between 100 percent and 300 percent depending on the task at hand, according to Boggs.