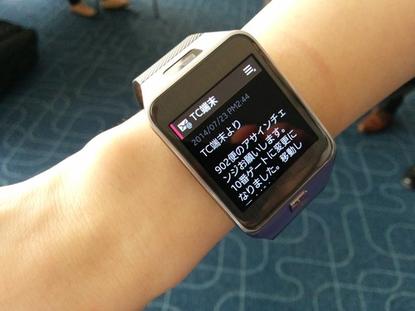 A Samsung Galaxy Gear 2 smartwatch displays information about a gate change during a Japan Airlines demonstration at Tokyo's Haneda airport.

It can be tough getting the attention of airport gate staff. Soon they might have an additional distraction: smartwatches.

Japan Airlines (JAL) on Wednesday demonstrated how some of its staff at Haneda airport in Tokyo are using Samsung's Galaxy Gear 2 to locate and communicate with each other.

JAL officials said smartwatches could help improve the efficiency of how and where airport staff are assigned, and improve passenger service.

Attendants at two gates in the airport's Terminal 1 building were sporting the smartwatches during the demonstration, which involved actual flights to domestic cities.

The Galaxy watches were linked to smartphones that receive data from JAL's back office at the airport. Meanwhile, the location of attendants, who shuttle between various stations in the terminal, was monitored using Apple's iBeacon tracker, which debuted in retail applications last year.

"It's difficult sometimes for staff to locate other staff," spokesman Keita Takahashi of JAL's airport planning division said in an interview. "We've been using walkie-talkie earpieces, but when talking to customers the announcements coming through the earpieces can be distracting."

The smartwatches displayed information about boarding time or gate changes, as well as information for passengers such as train and monorail departures from Haneda. Other staff were using LG G smartwatches powered by Android Wear.

JAL said the deployment of the Galaxy gizmos, part of a trial through mid-August, is the first commercial application of smartwatches in Japan.

But it isn't JAL's first experiment with wearables. In May, JAL and NRI tried out Google Glass in inspecting airplanes at Honolulu Airport.

"Many people at JAL would benefit from being able to work hands-free with wearables," said Junya Okuda, a manager in the carrier's IT planning and management department. "For instance, maintenance crews could quickly take photos of lightning burns with Google Glass and communicate the situation to controllers."