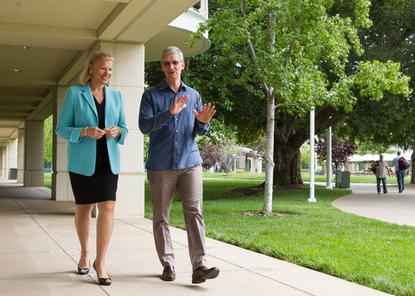 It's hard to imagine a more unlikely partnership: Apple, the highpoint of trendy consumer-focused mobile computing and IBM, the high point of, well, the opposite -- the business mainframe computer hulking in a data center.

But put them together, and some interesting things could happen for enterprise IT and business iPhone and iPad users.

Apple and IBM unveiled a major partnership designed to integrate Apple iOS devices and apps with a range of IBM Cloud services, Big Data and analytic capabilities for mobile workers. IBM will also become the first systems integrator to sell iPhones and iPads coupled with industry-specific "solutions" - apps, services and other software - to enterprises world wide. [Apple CEO Tim Cook said in a CNBC interview alongside IBM CEO, Ginni Rometty, that the two had been in discussions for a couple of years about possible ways to work together, and he labelled this deal as "landmark".]

The joint press release says that the "IBM MobileFirst for iOS" deal will have "the power of more than 100,000 IBM industry and domain consultants and software developers behind it." Some are taking this to mean that 100,000 IBM employees will be devoted to this one project, but that would be about 25 per cent of IBM's current global workforce. The press release explicitly references "IBM's 5000 mobile experts [who] have been at the forefront of mobile enterprise innovation."

There are four main elements in the Apple-IBM deal, and they show that the decision makers in both companies are thinking ambitiously.

The IBM services for MobileFirst for iOS will be available on Bluemix - IBM's development platform on the IBM Cloud Marketplace.

As it has often done, Apple is addressing a market need through a cleverly-staged partnership, but one that is more than simply marketing jargon.

MobileFirst is a strategic initiative, launched in February 2013 by IBM Software Group, to embed the vendor deeply in the work of securely "mobilizing" the enterprise, including cloud services that can be accessed by mobile workers. Fiberlink, with its Cloud-based enterprise mobile management suite, was only the latest acquisition intended for MobileFirst: others include WorkLight, for its cross platform mobile app development, and Rational Software (bought in 2003), with its collaborative development tools for software/systems development and deployment.

IBM can bring to bear on enterprise mobility needs a wide and deep range of consulting, deployment, operational and software development resources, along with integration to massive databases and the analytic applications to turn that data into information for business decision-making.

Apple has been steadily boosting enterprise-specific features in iOS, as well as continuing to improve the iOS (and iCloud) security architecture [see "Apple reveals unprecedented details in iOS security"] partly in response to the massive deployment of iOS devices in businesses of all shapes and sizes. [see "How Apple conquered enterprise mobility, without even trying"]

"This deal is driven by IBM Software, who want to get as many clients as possible," says Jack Gold, principal with J. Gold Associates, a business technology consultancy and research firm, in Northborough, Massachusetts. "IBM doesn't make tablets, smartphones, or PCs, so it's logical to partner with Apple for the iPad and iPhone since they are becoming such an important part of the enterprise app landscape. This is just good business on IBM's part. And on Apple's as well, because it gets them more ingrained in the enterprise app space that they couldn't do on their own."