With Android Auto on your phone, users can access navigation, traffic info in their cars 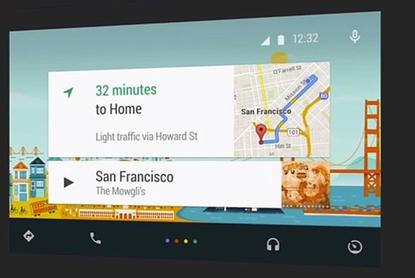 With Android Auto on a smartphone connected to the car, users can access navigation, traffic info and music in their cars via voice.

SAN FRANCISCO -- Google is bringing its Android mobile operating system to one more thing that you use every day -- your car.

The company announced today during its annual Google I/O developers conference that it's working on what it dubbed Android Auto, a platform that uses voice activation to give drivers access to navigation, traffic updates and their music.

With the help of Android apps on your smartphone, your car soon will operate like another Android device.

"It looks and feels like it's part of the car, but all of the apps are running on the phone," said Google director of engineering Patrick Brady, during the conference's opening keynote session. "This makes it a personalized experience."

Google announced that the Android Auto SDK (software development kit), with a full set of APIs for audio and messaging apps, is in the works. Android Auto is set to be released later this year.

Patrick Moorhead, an analyst with Moor Insights & Strategy, said this is a great move for Google to make.

"I like Android Auto a lot," he said. "It is helping to fix the biggest issue in the car -- paying attention. The linchpin is the quality of the speech command and control, which is improving, but not great."

He also likes that the apps will reside on the user's phone, instead of directly in the car.

"Drivers want the latest and greatest apps and don't like watching car apps age over time," Moorhead said. "Google's approach is solid as it ensures you get the latest apps even if your car is five years old."

With Android Auto on a smartphone connected to the car, users can access navigation, traffic info and music in their cars via voice. (Photo: Goggle I/O screengrab)