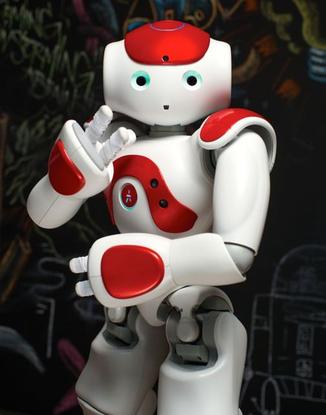 If you're on the lookout for the personal robot of your dreams, the cute French robot Nao just got a performance boost.

Mainly used for education and research, Nao has a new 48.6 watt-hour battery that can power it for about 1 hour and 30 minutes when it's in operational mode, Aldebaran said Friday.

It's equipped with the same NAOqi 2.0 operating system that powers the larger humanoid robot Pepper, recently unveiled by Japanese mobile carrier SoftBank, whose group company owns about 78 percent of Aldebaran.

New sonar rangefinders have improved its distance estimation and obstacle detection powers, giving them a range of 1 centimeter to 3 meters. Its ability to locate the source of sounds, for which it uses four directional microphones, has also been refined.

"Nao has a new visual tracking software and it can detect angry or happy expressions on people's faces as well as whether they're standing or sitting," a spokesman for Aldebaran in Tokyo said in a phone interview.

"We've also improved its grip so that its fingers can grasp light objects such as pens and balls."

Meanwhile, the 58-cm-tall Nao has been made stronger with metal gears in its neck, hips, legs and ankles. Noise-dampening soles make the machine quieter when it walks around.

But if you were hoping for a price cut, don't hold your breath. Nao Evolution is available in North and South America for US$7,990, the same as the fourth-generation Nao, as well as in Asia and Europe.

The French firm is hoping the new Nao will prompt developers and companies to create apps for the robot.

More than 5,000 Nao robots are in use in 70 countries, according to Aldebaran.