Microsoft releases a list of features for upcoming Office 365 revisions, in a bid to publicly lure more customers to the platform. 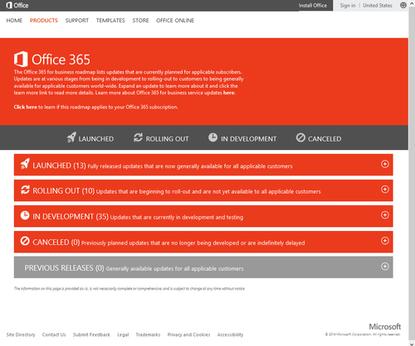 One of the advantages of Microsoft’s Office 365 suite, Microsoft claims, are the ongoing addition of features, which suddenly show up on a user’s desktop.

One of the advantages of Microsoft's Office 365 suite, Microsoft claims, are the ongoing addition of features, which suddenly show up on a user's desktop. But Microsoft has now published an upcoming roadmap of those features, recognising that it needs to sell those features to new and existing users.

Microsoft's new Office 365 roadmap will live on its website, providing an ongoing ruler by which to measure which features have shipped, which are rolling out, and which are under development. The level of detail is impressive, with a bulleted list of features that can be expanded to provide more detail and then redirected to a new page for a more complete explanation. One key addition is Office 365 First Release, which will give subscribers the option to receive new features at least two weeks before customers on the "Standard" release cycle.

Microsoft executives said in a blog post that communication is the key.

"First, many of you are really excited about the new update cadence, specifically the ability to consume change in small chunks, our responsiveness to your feedback, and fast access to the high value of the new services and feature," Jake Zborowski, a group product manager for Officer 365, wrote in a blog post. "And second, just as we transformed our development processes, we need to transform our communication processes regarding changes and future updates to the service."

"The public roadmap will be your best source of truth for product enhancements coming to the service," Zborowski added. In most cases, the extent of the timeline will extend outwards just a few months, with a few exceptions, including major updates like Microsoft's Project Oslo and the Office Graph.

The current updates that are being rolled out include Office 365 First Release, which gives users first dibs on the Office 365 user experience, SharePoint Online, and Exchange Online first and foremost. Updates to Lync Online, Exchange Online Protection, Office 365 ProPlus, or other related services are not included, Microsoft said. (To sign up, Office 365 administrators  can log into the admin portal and select First Release under service settings: Go to Admin > Service settings > Updates.)

Microsoft also currently lists 35 new features that it is working on for new revisions of Office 365. Some of them are:

There are more, of course, which will be constantly updated as Microsoft's update engine rolls on. But Microsoft is addressing a primal geek need: everybody loves new features, and everybody wants to know when they'll arrive. Microsoft has taken an important step to satisfying IT admins and new users alike with its new roadmap.