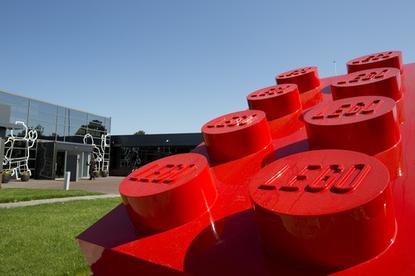 Main entrance of the Lego group HQ in Denmark

Lego, the Danish maker of the namesake toy bricks known to kids all over the world, has figured out what appears to be an ingenious way to combine the physical world of their traditional building blocks with the virtual world of app games.

The company is releasing a series of four games, each comprising a free iOS or Android app, a set of Lego bricks and a small brick-building plate with a printed design that allows smartphone and tablet cameras to identify the size and colors of the bricks built onto it. The goal is to build a 2D structure on the capture plate, scan it with the app and import it to transform the creation into 3D in the digital world.

By combining the physical and virtual worlds, Lego wants to help parents prevent what it calls "zombie gaze," when children get fixated on their device screens for large blocks of time, it said.

Lego's new Create & Race game, for example, lets players virtually "drive" the cars they build with the physical bricks. Players design a custom vehicle, build a physical version and scan the car with a mobile phone to import it into the app, where it can be raced. The cars can be optimized for racing, demolition or stunts and they can be raced against friends to try to top the leaderboard. Players also learn that every brick shape and color on the vehicle matter for performance.

The Town Master game lets players design and build a town with buildings that can include houses, pizzerias and fire stations. Players can complete missions like fighting fires and catching robbers and also have to keep the citizens of the town happy by physically building more structures. Players can also earn points to gain access to additional structures and run additional towns.

Lego will also offer a game called Battle Towers that lets players build a tower that they have to defend against attacks so they can rule a kingdom. If a tower is damaged in battle, it can be repaired with a timed build with the game's real bricks.

Children can design their own beach resort in Resort Builder, building 2D facades and designing the interiors of buildings such as surf shops and beach houses that they can then capture and import into the app. Within the game, levels can be unlocked and more resorts can be built after players complete missions like rescuing dolphins, surfing and other activities, Lego said.

Town Master, Battle Towers, and Create & Race will be available in August 2014, while Resort Designer will launch in September. The sets cost US$34.99 and as of September Lego Fusion will allow players to access their creations and game play on any compatible iOS or Android device.