The new tool from Elcomsoft, intended for law enforcement, only works under certain conditions 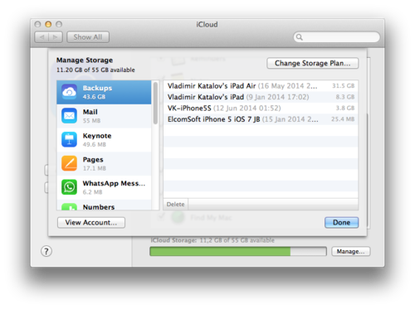 A forensics tool from the Russian company Elcomsoft can obtain iCloud backups without needing a person's Apple ID, but physical possession of the device is required.

The company, which specializes in forensic tools, said the feature has been incorporated into the forensics edition of Phone Password Breaker, which can crack password-protected backups for Apple and BlackBerry devices.

Elcomsoft previously figured out how to access iOS mobile backups remotely without having a person's actual device. But to do that, law enforcement did need to have a person's Apple account credentials.

The latest development allows investigators to access an iCloud backup without those credentials. It does have limitations, however, as investigators need to have a suspect's device in hand.

Phone Password Breaker grabs an authentication token that is created when a person logs into iCloud. Once a person is logged into iCloud, they're usually always logged in, as iCloud regularly backs up selected data from a machine.

"In other words, you have a high chance of obtaining authentication tokens from a computer that has iCloud Control Panel installed," Elcomsoft wrote. "The ability to use authentication tokens acquired from the suspect's computer in place of plain-text logon credentials is of major importance to forensic investigators."

Elcomsoft discovered some interesting tendencies of the iCloud authentication tokens. The tokens can't be reverse-engineered to recover an original password. The tokens are deleted if a person logs out of the iCloud Control Panel and then can't be obtained. The tokens may expire after a while, but it isn't clear when, the company said.

For North American customers, the forensic edition of Phone Password Breaker costs US$399.