Salesforce takes a shot at Zendesk, Freshdesk with Desk.com upgrade

Desk.com customers can 'grow' along with Salesforce.com, unlike rivals, according to an executive 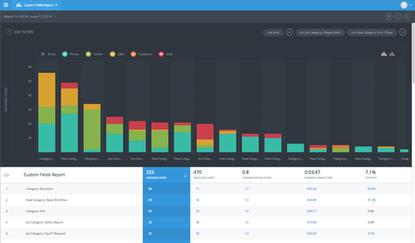 Salesforce.com is rolling out a big update to Desk.com in a bid to shove aside the likes of Zendesk for the SMB market.

Salesforce.com wants to be the go-to option when small and medium-sized businesses decide they need better customer support software, with a series of updates to its Desk.com application.

Desk.com is the result of Salesforce.com's 2011 acquisition of Assistly and is the SMB alternative to its Sales Cloud support software suite, which is aimed at big companies.

While Desk.com can stack up feature-for-feature with the likes of Freshdesk and Zendesk, Salesforce.com's real edge lies in the fact that "we can grow with our customers," said Leyla Seka, general manager and senior vice president at Desk.com. "We can take our customers anywhere they want to go. That's something no other point solution on the market can say."

"The worst thing in the world is when you're growing [a company] at a fast clip and then you have to switch out an important operational system," Seka added.

Desk.com caters to small companies that want to reach customers across multiple channels, whether email, live chat or social media, while getting the system up and running quickly.

The Desk.com updates announced Tuesday include a revamped console for support agents. Beta customers have reported their agents are closing cases three times faster than before, according to Seka.

Improvements include the ability for an agent to tweak the console screen's layout to their liking, as well as the introduction of macro actions. For example, an agent faced with a stack of similar customer inquiries, such as for a password reset, can select the entire group and fire off a boilerplate response containing instructions, rather than go into each case and do the same thing repeatedly.

The new Desk.com also provides a series of case filters, helping agents prioritize cases based on factors such as their urgency level and length of time in existence.

Salesforce.com was careful not to design the updates for speed alone, according to Seka. "Agent productivity at the expense of customer satisfaction is not what we're going for," she said. "Agents are going faster and they're doing it right the first time."

Other updates include a new mobile application and an improved reporting engine. With the latter, Desk.com users can identify trends in customer complaints, pinpoint what types of content are most helpful in resolving cases, and monitor how well their support agents are performing.

In addition, the Desk.com upgrade features an improved self-service portal that includes predictive answers to questions, albeit pulled from a knowledge base that Desk.com customers must do the work to pre-populate.

Finally, a tenfold increase in API (application-programming-interface) granularity in the new release means it will now also be easier for companies to integrate with other applications, if desired.

Tthe market for SMB help-desk software is substantial, given the presence of millions of small companies in the U.S. alone. The rise of social media and mobile devices in turn has made it easier for customers to reach companies they do business with and places pressure on companies to respond with better support.

Seka echoed the notion. "Gone are the days of customer support being the check box," she said. "Now it's the most important tool in the arsenal. Smart companies are creating a support road map that sits right alongside their product road map."