The Sony tablet is thinner and lighter, but Samsung isn't far behind and offers a higher screen resolution 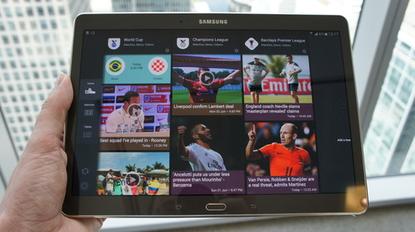 As if there weren't enough Android tablets with 10-inch screens on the market to make choosing one over the others an already difficult task, Samsung Electronics has thrown another option into the ring with the Galaxy Tab S 10.5.

The new Galaxy Tab provides a fairly close match up with Sony's Xperia Z2 Tablet, so the decision could come down to one or the other. Here's a spec comparison:

The Galaxy Tab S 10.5 runs on Samsung's own Exynos 5 processor -- with four cores at 1.9GHz and another four cores at 1.3GHz -- or a quad-core Snapdragon 800 processor from Qualcomm with a 2.3GHz clock speed. Sony's tablet relies solely on the Qualcomm processor.

When Samsung launched the Galaxy Tab S 10.5 Thursday it boasted a lot about the tablet's screen, which is based on the company's Super AMOLED technology, measures 10.5 inches and has a 2560 by 1600 pixel resolution. However, the 10.1-inch screen on the Xperia Z2 Tablet is no slouch with 1200 by 1920 pixels.

The Galaxy Tab S and the Wi-Fi version of the Xperia Z2 Tablet have either 16GB or 32GB of integrated storage, while the LTE version of the Sony tablet has 16GB. The storage can be expanded using a microSD card by up to 64GB on the Sony and 128GB on the Samsung tablet. They both have 3GB of RAM.

The Galaxy Tab S wins this round with a 7,900 mAh battery, while owners of the Xperia Z2 Tablet have to make do with 6,000 mAh.

Sony's Xperia Z2 Tablet is already available, while the Galaxy Tab S 10.5 will start shipping early in July. They both cost from US$499.