The new Asus laptop will ship worldwide in August 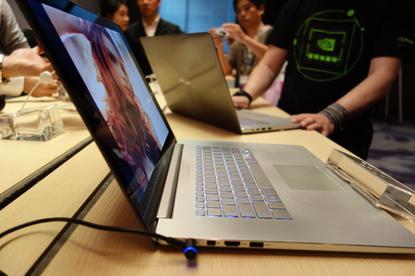 Side view of the Asus Zenbook NX500.

Asus' upcoming Zenbook NX500 looks a lot like Apple's MacBook Pro, but that's no complaint. The high-end laptop is a posh device that left us impressed, especially with its 4K screen.

Asus took the wraps off the Windows laptop on Monday, and we had a chance to try it out. Although no price was given, the notebook feels expensive and sturdy. Like the MacBook Pro, the NX500 is contained in a silver casing made out of aluminum. Its surfaces are smooth and polished, and the laptop is still fairly slim, at 19mm thick. But at 2.2 kilograms, and with a 15.6-inch screen, it may not be the easiest laptop to lug around.

The NX500 was fast and responsive thanks to its Intel Core i7 quad-core processor and a Nvidia GTX 850M graphics card. But the standout feature is its 4K screen, which has a 3840 by 2160 pixel resolution. You'll get a small 4K monitor that vibrantly beams colors, and manages to make moving images almost lifelike.

Not only is the display top-notch, but it also works as a touchscreen. This is nice to have, given that the laptop runs Windows 8.1. It let us easily switch between the standard desktop user interface and the Windows 8.1 Start screen, and the touch controls were responsive and accurate.

In our brief hands-on session with the NX500, it seemed clear that Asus didn't cut corners, and tried to give the device some artistic flare. The keyboard is fitted with a neon blue backlight. In addition, the company has overlaid the laptop's speaker holes in between the spaces of the keyboard. The effect results in two stylish circular patterns, reminiscent of a Japanese rock garden.

Asus plans to ship the laptop in late August, but is still finalizing its price. Looking at its specs, we expect the NX500 to be pricey, but loaded with enough features and high quality design to rival Apple's 15-inch MacBook Pro.

The NX500 can have up to 16GB of RAM and storage of up to 512GB in a solid-state drive. Asus claims the laptop's battery can last between 7 and 8 hours on one charge. The laptop has three USB 3.0 ports, along with 802.11ac Wi-Fi connectivity.