Twitter more than doubles its sales, but still can't turn a profit 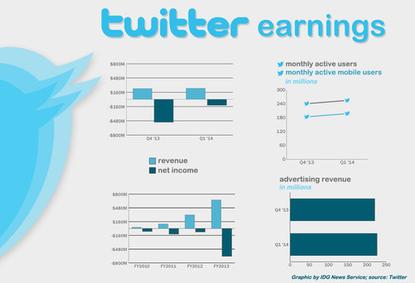 Twitter's earnings for the past two financial quarters and four fiscal years.

Twitter on Tuesday turned in some healthy sales figures for the first quarter, though its net loss grew substantially compared to last year.

Total revenue for the period ended March 31 was roughly US$250 million, Twitter reported, more than double the $114 million recorded for the same period in 2013. Twitter's sales topped analysts' consensus estimate of $241 million, as polled by Thomson Reuters.

"We had a very strong first quarter," said Twitter CEO Dick Costolo in the company's announcement. "Revenue growth accelerated on a year over year basis fueled by increased engagement and user growth."

However, Twitter hasn't managed to turn a profit since it became a public company. The company reported a net loss of more than $132 million for the quarter, nearly quintupling the loss of roughly $27 million reported for the year-ago period.

The company's earnings per share loss was $0.23, a tad worse than a loss of $0.21 reported last year. On a pro forma basis, excluding share-based compensation and other adjustments, Twitter broke even, beating analysts' expectations of a loss of $0.03 per share.

Twitter's stock was down to $38.30 in after hours trading, down considerably from its $42.62 Tuesday close.

To continue growing its ad revenue, Twitter needs to attract more users and increase the time they spend using the service. As a public company, Twitter is under pressure to make its service more accessible to a mainstream audience.

The company in recent months has tried to address this, partly through cosmetic changes like redesigning user profile pages and making photos more prominent in people's streams.

Twitter executives will hold a conference call with investors and financial analysts Tuesday afternoon to discuss the results in-depth. More information could be given during the call about the health of particular types of ads, or of Twitter's mobile ad network, MoPub.