The ink costs $500 a bottle, but only a few cents are needed to make a circuit 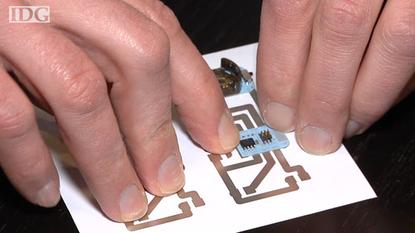 Printing a circuit board on your home inkjet printer and creating basic electronics is what Microsoft Research hopes will be the future for hobbyists and makers.

Using a home inkjet printer, special ink and photo paper, scientists from Microsoft Research have created what they hope will be the future for fabricating basic electronics. Presented at CHI 2014 in Toronto, the project uses "circuit stickers" which let users build electronics by sticking circuit elements onto paper.

To see the project, watch a video on YouTube.

The precursor to the new research was "instant inkjet circuits" presented last year by Microsoft Research. It used special silver nanoparticle ink in a printer cartridge. Users could design a circuit on the computer and send it to print. While the printer thinks it is printing in black and white, it's precisely applying the special, conductive ink.

"[The] little elements of circuitry can be stuck down with double-sided tape to make a working circuit," said Steve Hodges a principal engineer with Microsoft Research.

The project uses special tape from 3M that is conductive only in the z-axis, or through the tape, otherwise it would run the risk of short-circuiting the project.

Once printed, users could stick on the circuits. They include modules for batteries, accelerometers and buttons, among others.

Hodges said that the circuit kits would allow users to make basic projects, but nothing too complicated like a cell phone.

Since its just a research project now there are no immediate plans for commercialization.

Nick Barber covers general technology news in both text and video for IDG News Service. E-mail him at Nick_Barber@idg.com and follow him on Twitter at @nickjb.